Dwarf Galaxias, Galaxiella spp., are small freshwater Fish from southern Australia. The genus is split into two geographical groups which are thought to have split between 28.3 and 34.3 million years ago, with two species, Galaxiella nigrostriata and Galaxiella munda found in southwestern Australia and a third, Galaxiella pusilla, found in the southeast, where it occupies swamps, wetlands, shallow lakes, billabongs, small creeks and artificial earthen drains on the coastal plains of South Australia, Victoria and Tasmania. This eastern species is listed as Vulnerable under the terms of both the Australian Environment Protection and Biodiversity Conservation Act and the International Union for the Conservation of Nature's Red Listof Threatened Species. It is also know to be highly diverse with considerable habitat, genetic and morphological variation across its range, leading to speculation that not all the Fish of this population belong to the same species, in which case their conservation status may need to be reviewed, as two or species with lower populations and more restricted ranges would be at a higher risk of being wiped out.

The new species is named Galaxiella toourtkoourt, which means 'little Fish in freshwater' in the Tjapwurrung, Korn Kopan noot, and Peekwurrung language groups of Australia. The species is smaller than Galaxiella pusilla, or any other member of the genus, and has a lower average number of vertebrae and dorsal fin spines. Like all Dwarf Galaxies the new species is sexually dimorphic, with larger females than males, in this case adult females average 27-32 mm in length with the largest specimen found reaching 42 mm, and males average 25-28 mm with the largest specimen found measuring 34 mm. The Fish are a pale olive-brown above with a silvery underside and a reddish-pink patch around the gills. Adults have three horizontal black stripes, though these tend to be fainter and stippled in the females, particularly the upper two stripes, which can be hard to discern. A horizontal red stripe runs between the lower two black stripes in the males. 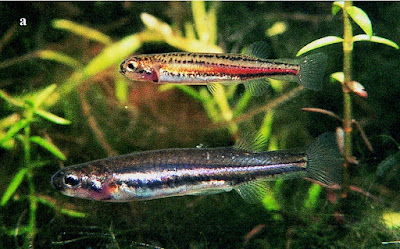 The species is found in fresh or slightly brackish waters in still or slow-moving waterways with plenty of shade, preferably with a clay or silt bottom. The species seems relatively tolerant of variations in temperature and water pH, but is only found at low elevations. It is found in southeastern South Australia and southwestern Victoria. Having a more restricted range than previously thought, as well as a fragmented population threatened by habitat loss across much of its range, it is recommended that Galaxiella toourtkoourt be considered to be Threatened under the terms of the Australian Environment Protection and Biodiversity Conservation Act and Endangered under the terms of the International Union for the Conservation of Nature's Red List of Threatened Species. Coleman also recommend that the conservation status of Galaxiella pusilla be raised to Threatened and Endangered, for the same reasons. 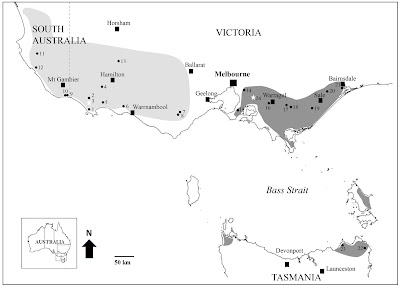 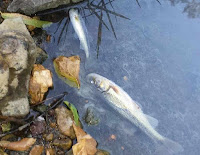 The effect of non-lethal Carbosulfan exposure on Rainbow Trout.               Carbosulfan, 2,3-dihydro-2,2-dimethyl-7-benzofuranyl (di-n-butylaminosulfenyl) methyl carbamate, is a carbamate pesticide which was banned in for use the European Union in 2007, but is still manufactured...
Follow Sciency Thoughts on Facebook.