J160421.7-213028: A young star in the Upper Scorpius Association with a possible massive planet within a protoplanetary disk.

J160421.7-213028 is a young star roughly 145 parsecs (473 light years) from Earth, which forms part of the Upper Scorpius Association, making it five to ten million years old. Observations of the star with the SubmillimeterArray and Atacama Large Millimeter/submillimeter Array have shown that the star is surrounded by a protoplanetary disk (disk of dust and gas around a young star from which planets are thought to form) with a radius of 63 AU (63 times the distance at which the Earth orbits the Sun) positioned almost face-on to us.

In a paper published in the journal Astronomy &Astrophysics on 22 October 2015 and on the online arXiv database at Cornell University Library on 1 October 2015, a group of astronomers led by Paola Pinilla of the Leiden Observatory at Leiden University discuss new observations of J160421.7-213028 made in June 2015 using the SPHERE instrument of the Very Large Telescope at a wavelength of 0.626 µm (observations of remote objects at different wavelengths tend to reveal different features, as different molecules reflect light at different wavelengths, so it is important to make observations at precise wavelengths). 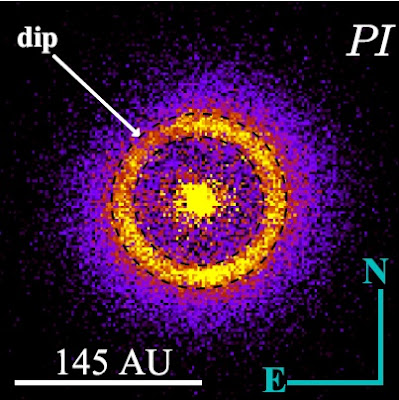 A gap in the outer ring of J160421.7-213028 was previously seen in an image taken with the High Contrast Instrument on the Subaru Telescope of the system taken in April 2012. If these two features are the same object then it appears to be moving around the disk in a clockwise direction at a rate of 12.3º per year, though it is possible that the dips represent two different temporary features, or that the object is in fact moving much faster and has completed one or more revolutions about the star in addition to its apparent movement in the time between the two images.

An object orbiting a star at a distance of 59 AU would be expected to travel at a rate of ~0.8º per year, considerably slower than the observed feature. However a dip in the brightness of the ring does not necessarily imply an object within the ring; all the light seen in the ring is in fact produced by the star and only reflected by objects in the ring, so it is quite likely that any dimming of the light seen coming from the ring actually reflects an object closer to the star casting a shadow onto the ring.

J160421.7-213028 has a gap in its disk between 15 and 40 AU from the star. A gap this large would could be caused by a very large planet forming within the disk. Such a planet would be expected to have a mass 5-10 times that of Jupiter (still to small to be directly observed at the distances involved) and to orbit at a distance of 20-40 AU. However such a body would still be to far from the star to move at a speed of 12.3º per year.

Calculating from the speed of the perceived movement of the dark area, if it is a shadow then it would need an object orbiting the star at a distance of 9.6 AU (within the inner disk of the system) to cast a shadow moving at the appropriate speed.

Pinella et al. suggest that future observations of the J160421.7-213028 system (which are planned) should reveal whether the feature seen in the two images is the same and is moving on a predictabel trajectory, or alternatively unrelated temporary features. 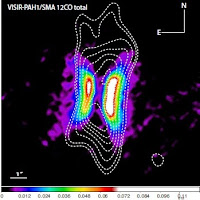 Imaging the potential protoplanet in the Gomez’s Hamburger system.
Many young stars are surrounded by extensive disks of dust and gas. These disks are thought to be where planets are formed, and are therefore known as protoplanetary disks. Recent discoveries of large planets orbiting young stars at tens or even hundreds of AU (i.e. tens or hundreds of times the distance at which the Earth orbits the Sun) has led astronomers... 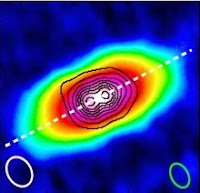 The outer disk of T Chamaeleontis.
T Chamaeleontis is a T Tauri star (a very young star which has not yet began to generate heat by hydrogen fusion, but which produces considerable energy through gravitational heating) estimated to be about 7 million years old, roughly 350 light years from Earth in the constellation of Chamaeleontis. It is known to be surrounded by two transition disks (disks of dust and gas surrounding very young stars, thought to be... 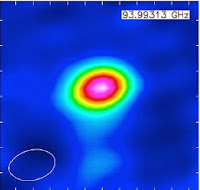