Swimmers and surfers have been advised to keep away from an area of Jumpinpin Beach on North Stradbroke Island, to the south of Brisbane in Queensland, Australia, after a section of beach approximately 100 m long disappeared abruptly on Wednesday 25 November 2015. Nobody was hurt in the incident, and nor was it directly observed, due to the remoteness of the beach, about 15 km from the nearest patrolled beach, however the event has changed the flow of currents in the area in unpredictable ways and the sand on the beach close to the gap is described as being 'unstable'. 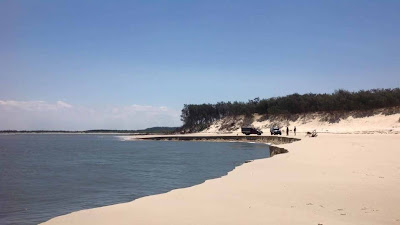 At first the incident was thought to be a sinkhole, a phenomenon caused by water eroding soft limestone or unconsolidated deposits from beneath, causing a hole that works its way upwards and eventually opening spectacularly at the surface. Where there are unconsolidated deposits at the surface they can infill from the sides, apparently swallowing objects at the surface, including people, without trace. Sinkholes are common in soft coral limestones, and many coastal areas in tropical areas boast extensive sinkhole cave systems.

However the event is now thought to have been caused by a submarine landslide in the Junpinpin Channel, which separates North and South Stradbroke Islands. Such events are common in the area, where deep high speed currents regularly move large volumes of sand, though most such events are not obvious at the surface. Both the Strandbroke Islands are in fact sand bat islands, part of a shifting system of sand bars and channels in the area, that continuously evolves over time, with no islands or channels being truly permanent features. 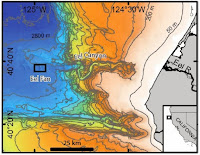 Interpretting turbidite deposits on the Eel Fan off the coast of Northern California.         Turbidites are sedimentary deposits formed by submarine landslides. They have a distinctive structure, typically course grained at the base with the sediment growing finer upwards within the deposit. Since the conditions for the formation of such deposits tend... 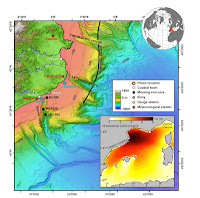 A modern turbidite deposit from the Mediterranean Coast of Spain.               Turbidites are sedimentary rock formations formed by submarine landslides. They are very distinctive, as water is very efficient at separating sediments by particle size, since larger, heavier particles will sink rapidly but smaller, lighter particles will remain in suspension for longer, taking more time to settle out. The upshot of this is that turbidite deposits show a...