Molecular oxygen in the coma of Comet 67P/Churymov-Gerasimenko.

In recent years studies of the comas of numerous active comets (the coma of an active comet is the gas and dust envelope which surrounds it; this is not a true atmosphere as it is continuously replenished by the sublimation of ices from the comets surface as it is lost to space), both by remote sensing and by space probes, has given us a good understanding of the composition of typical comets. In all comets water (H2O), carbon dioxide (CO2) and carbon monoxide (CO) together make up about 95% of the coma material, and presumably therefore the ices forming the comet itself. The remaining 5% of the material is predominantly made up of hydrocarbons and sulphur compounds with a broad array of other chemicals present, though to date molecular oxygen (O2) has never been found in the coma of any comet.

In a paper published in the journal Nature on 29 October 2015, a team of scientists led by Andre Bieler of the Department of Climate and Space Science and Engineering at the University of Michigan and the Physikalisches Institüt at the University of Bonn, describe the discovery of molecular oxygen in the coma of Comet 67P/Churymov-Gerasimenko.

The discovery was made by the ROSINA-DFMS mass spectrometer on the Rosetta spacecraft, which measured the composition of the coma of 67P/Churymov-Gerasimenko from September 2014 until March 2015. While the levels of molecular oxygen varied over this time (as is the case for all molecules in the comas of comets, which are constantly lost to space and replenished by the melting of different patches of ice with differing compositions) the ratio of molecular oxygen to water remained fairly constant, suggesting that the molecular oxygen was trapped within water ice prior to its release. 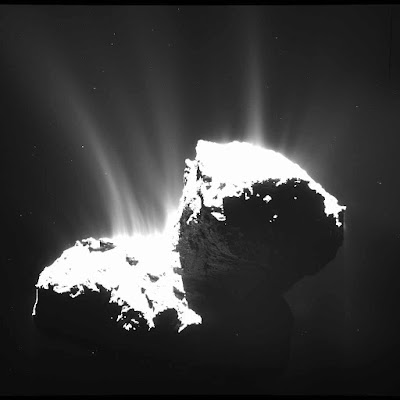 Image of 67P/Churymov-Gerasimenko taken by the Rosetta spacecraft from a distance of 30 km, showing fine jets of material that make up the cometary coma. European Space Agency.

Molecular oxygen can form within water ice by photolysis (breaking of the bonds in the H2O molecule by collisions with ultraviolet photons, with the smaller hydrogen atoms subsequently able to escape from the crystal matrix of the ice, while the larger oxygen atoms are trapped) or radiolysis (the same, but with more energetic photons or fast electrons and ions) and molecular oxygen detected on the Jovian moons Europa, Ganymede and Calisto and in the rings of Saturn is thought to have formed in this way.

However in addition to molecular oxygen (O2)) photolysis and radiolysis of water ice should form ozone (O3) molecules; these have been detected on the Jovian moons and in the rings of Saturn, but are apparently absent from the coma of 67P/Churymov-Gerasimenko (or any other comet). 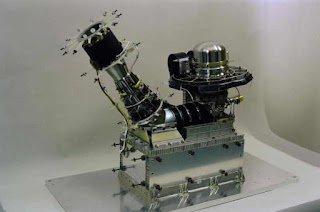 However this does not fit well with our current understanding of how the Solar System formed. To date molecular oxygen has been found in only two interstellar clouds, the ρ Ophiuchi Dense Core and the Orion A Giant Molecular Cloud. Studies of the ρ Ophiuchi Dense Core suggest that it has experienced temperatures of 20-30 K during its lifetime, while most interstellar clouds never experience temperatures of more than 10 K. This suggests that in order for molecular oxygen to have been present in the Outer Solar System to be incorporated into forming comets, the molecular cloud from which the Solar System formed would also have had to have been exceptionally warm.

Image of the ρ Ophiuchi cloud taken by the Wide-field Infrared Explorer (WISE) space telescope. NASA/JPL.
This is not something that has previously been predicted, and would prompt a re-evaluation of our ideas on how the Solar System formed. However one other piece of evidence from 67P/Churymov-Gerasimenko does support this theory. The coma of the comet has been found to contain considerably lower levels of molecular nitrogen (N2) than predicted, and this lower nitrogen level is also consistent with formation from a warmer gas cloud. 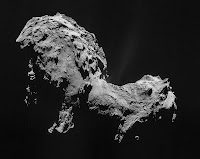 Sinkholes on Comet 67P/Churyumov-Gerasimenko.
Many comets have been observed to have pitted surfaces. Initially these pits were thought to be the result of collisions with smaller bodies, as with craters on planets and moons, but they have been shown to be far to numerous for this to be the case, as... 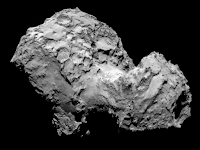