Gulls, Larifdae, are exceptionally flexible predators found in coastal, inland and open marine habitats throughout the world. They are highly opportunistic, typically having diets that alter throughout the year as different food sources become available, and adapt rapidly to new food sources when they become available. The Kelp Gull, Larus dominicanus, is considered particularly flexible even for a Gull, being found across most of the Southern Hemisphere from the shores of Antarctica to the southern tropics, and being able to consume a diet that ranges from small invertebrates to beached Sharks and Whales; there have even been reports of them attacking surfacing Southern Right Whales Eubalena australis, tearing chunks of flesh from the Whales and consuming it.

The Seals observed were at a breeding colony at Pelican Point in the Dorob National Park to the west of Walvis Bay. This colony was reduced by hunting to under 100 individuals in 1995, but since then the species has been protected, and a successful ecotourism industry developed, and between 20 000 and 80 000 individuals can be found at the site each breeding season.

The Gulls targeted newborn pups that had strayed from their parents, or older juveniles that were sleeping, initially attempting to remove and consume the eyeballs. In about 50% of observed attacks this initial assault was successful, and followed up by further attacks on other areas of soft tissue, such as the underside and anus region, invariably leading to the death of the Seal. In the remaining 50% of instances the Seal was able to escape, sometimes with the assistance of other Seals. 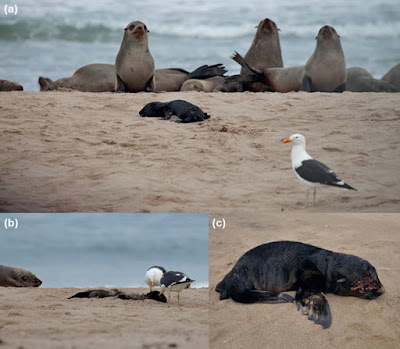 Over the course of 15 years about 500 attacks on Seals by Gulls were observed at Pelican Point; many more dead Seals were observed with their eyes pecked out, including newborn pups, juveniles and adults, however Gulls will also feed on Seals that have died of other causes, with the eyeball being a preferred item, and have also on occasion been seen feeding on Seals that have survived Shark attacks but been badly wounded. Nevertheless the attacks appear to be a new form of behavior, having not been observed at the site before 1998 and recorded nowhere else in the shared range of the two species. The behavior has apparently been driven by the recovery of the Seal colony, which has provided a new food source for the Gulls in the form of Seal cubs, though the Gull population has also risen sharply in recent years, which would be predicted to drive the Gulls to seek novel food sources.