There has been a story in the news this week about how scientists have explained how the Red Sea could have parted, allowing the Israelites to escape from Egypt (Sky News The Guardian). This is of course slightly hyped, the study refers to the Nile Delta rather than the Red Sea, and lays out how under the right set of circumstances a strong consistent wind might cause an unusually low neap tide. This is not exactly the stuff of legend, but then that doesn't really matter. The faithful can still believe that god miraculously parted the waters of the Red Sea, and the rest of us don't care.

The usual objection to the story of the parting of the waves has (at least since the translation of Egyptian hieroglyphs) is that the Egyptians never wrote anything about it. Devout believers tend to argue that the Egyptians suppressed the story because it was so awful, but its hard to see how that could have been possible. Ancient Egypt cannot be compared to the Soviet Union suppressing casualty reports from Afghanistan. The Pharaoh was a living god, but a god with dynastic rivals. As Pharaoh he (or occasionally she) was responsible for making sure his fellow gods continued to favour the nation. A Pharaoh who presided over an army, lead by his heir apparent, being engulfed by the waves would most likely have been quickly (and fatally) replaced. The new Pharaoh would then have been much less squeamish about recording events - albeit with a different spin to that given by the Israelites.

Should the waters of the Red Sea ever really part then close they would (assuming absence of divine intervention) cause far worse problems than the drowning of any unwise armies that strayed into the parting. The Red Sea is a baby ocean forming as Africa splits away from Arabia (and in the future probably splits in half along the great Rift Valley). It has a mid ocean ridge; a chain of volcanoes deep beneath the waves where the continental plates are tearing apart. This would not just be problematic for anybody trying to walk across. These volcanoes are normally crushed beneath the weight of up to two kilometres of water, and water permeates their rocks, held in a liquid form at hundreds of degrees centigrade by the pressure of the water above. Should the water be removed then the explosions would be pretty spectacular, as would the second set of explosions when the waters poured back over the now exposed volcanoes. The explosions of the exposed volcanoes would have thrown thousands tons of ash into the atmosphere. Both the parting and the returning of the waters would have caused millions of tons of water to evaporate. This would have caused intense climatic chaos at a local level for several years, and probably affected the global climate for decades. Needless to say nobody (anywhere) recorded such events.

Other tales of cataclysmic floods have been handed down from the ancient world. The global flood of Noah (or Gilgamesh), the drowning of Atlantis. We don't tend to take these seriously anymore, but for a long time they coloured the way we think about the world.

Charles Darwin is widely attributed with having discovered evolution. This makes a nice story, one man completely overthrowing our view of the world (and at the same time abolishing god), but it is completely untrue. Evolution had been documented long before Darwin's birth, and several theories had been put forward to explain it - most famously those of Lamark. What Darwin (and Wallace) did was to study evolution in a methodical way. and try to explain it - rather successfully as it turned out.

Darwin observed evolution in action on small islands. For example it was possible to tell which islands the tortoises of the Galapagos by their adaptations, those they are clearly closely related. Darwin's theory of natural selection can explain how tortoises reaching new islands would adapt to local conditions, but where did the new islands come from?

Early in the nineteenth century it had been realised that mountains are not static ancient objects, but active systems continuously growing upwards and being eroded by the wind and rain, but nobody had any idea why this might happen. We now attribute this to the movement of the continental plates. The Himalayas are being thrust upwards by the collision of Asia and India. The Andes arise as South America rides over the Pacific Plate. But in the nineteenth century this idea would have been considered insane. How could the continents possibly move?

Darwin was a geologist by training, and one of his discoveries was how coral atolls formed. He looked at dozens of Pacific Islands, and realised there was a pattern; they had a 'life cycle'. Volcanoes on the ocean floor grew up to the surface and formed volcanic islands. Corals colonised the shallows around these islands, forming reefs. Eventually the volcanoes sank back beneath the waves, but the coral reefs continued to grow upwards, forming ring shaped islands where the volcanoes had formerly stood. So new land could be formed by mountains rising from the seas.

The botanist Joseph Hooker, a friend of Darwin's, took things further. He set up an experiment on the remote Island of Ascension. This was a British territory, and an important supply port for the Royal Navy, but it was barren and lacked fresh water. Banks theorised that vegetation could alter climate, and planted tropical forests on Ascension. It worked, the forests thrived and brought rain to Ascension. So not only could new land form, but life could colonise it, and alter the climate to make it habitable.

As they travelled the world the naturalists of the eighteenth and nineteenth century observed similarities between the flora and fauna of unconnected continents. Marsupials are found in Australia and South America. Large flightless birds in both, and Africa as well. So how did animals and plants cross oceans? Some seeds can cross oceans; coconut palms are found throughout the tropics and their floating seeds rapidly colonise any new land. But large flightless birds? This seemed implausible.

Almost everywhere they look, no matter how far from the sea, palaeontologists find fossils of sea creatures. The only possible explanation for this is that the lands where these fossils were laid down were once under water. It was understood that mountains grew upwards, and even emerged from beneath the sea. Therefore it was not unreasonable to assume that lands rose above and sunk beneath the waves. Thus animals did not cross oceans, they didn't have to, they crossed land bridges that subsequently sunk beneath the ocean. It all made perfect sense, and it was all completely wrong. 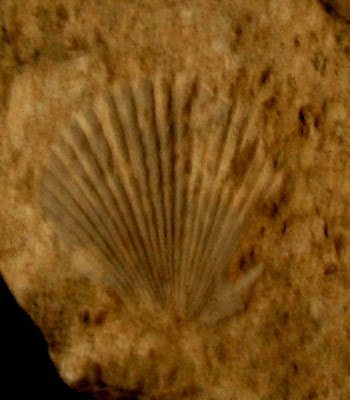 A fossil scallop, I picked up just outside Madrid.

Then in 1912 a German meteorologist called Alfred Wegener came up with a different theory. What if continents didn't rise and sink, what if they moved about. This was, by and large, treated with derision. Wegener wasn't a geologist, and his ideas went totally against the model of how the world worked that had been built up over the previous century. As it turned out he was right, but nobody took his ideas seriously till the nineteen thirties, and they didn't gain general acceptance till the sixties.

HP Lovecraft is now remembered as one of the greatest writers of gothic horror of the twentieth century, but he is not generally considered a science fiction writer. However Lovecraft's writings are firmly bedded in scientific theory as it stood during his lifetime. Lovecrafts stories are littered with tales of lands that rise above, and sink below the waves. The city of R'lyeh where great Cthulhu slept lay beneath the Pacific Ocean, but when the stars were right it would one day rise again. The nameless city was in the heart of 'Araby', but had once stood on a coast and traded with the world. Lovecraft had a pathological fear of the sea and everything in it so was a potent source of horror for him. Many of his creations had a distinctly fishy feel, from Cthulhu himself to the fishmen that plagued Innsmouth,

Looking back at this we see the horror in Lovecraft's tales, but miss the science. But the rise and fall of the continents was mainstream science in Lovecraft's day. To fail to appreciate Lovecraft's status as a science fiction writer simply because this theory has now been rejected would be like dismissing HG Wells because Mars turned out not to support an advanced civilisation and there are no pterosaurs in South America.
Posted by Joe Bauwens at 20:32 25 comments: