A driver returning to his car after visiting a gym in the Downtown area of St Louis, Missouri on Thursday 29 June 2017 was shocked to discover the vehicle had been swallowed by a sinkhole measuring six meters across and about seven meters deep. Nobody was hurt in the incident, but it is unclear at this time whether the vehicle will be salvageable. However in this occasion the sinkhole is believed to have been caused by a ruptured water main, which washed away unconsolidated sediments beneath the road, creating a void into which the vehicle collapsed. 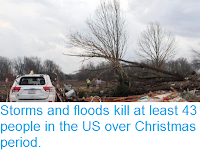