Choking on Fish is a significant cause of death for Dolphins in Indian River Lagoon, Florida.

Bottlenose Dolphins (Tursiops truncatus) are predatory Ceteceans, which primarily hunt small Fish. They are intelligent, social animals, which hunt in packs and are capable of developing new hunting methods to deal with novel prey items.

In a study published in a paper in the journal PLoS One on 19 June 2013, a group of scientists led by Megan Stolen of the Hubbs-SeaWorld Research Institute looked at causes of death among stranded Dolphins in the Indian River Lagoon and adjacent areas of the Atlantic Ocean over a 14 year period from 1997 to 2011. During this period they found that 14 of 350 Dolphin deaths in the lagoon were a direct result of choking on fish (4% of the total), while none of the 186 dead Dolphins recovered from the open ocean had died in this way. Dolphins that have died in this way have been found before, but this is extremely rare; of 19 recorded cases of Dolphins choking on Fish known globally, 14 are from this location and discussed in this study. 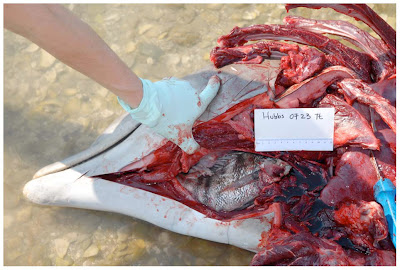 The body of a Bottlenose Dolphin with a Fish lodged in its esophagus. In this case the Fish is a Sheepshead (Archosargus probatocephalus). Stolen et al. (2013).

In five of the cases the Fish were associated with fishing tackle; two of the Fish had lures attached, and one Fish had a line attached with hooks that had become embedded in the Dolphin's esophagus. In the remaining two cases lines and lures were present, but not attached to the fish, making it hard to say with confidence that they had come from this Fish which had killed the Dolphin.

All the fish were between 19 and 40 cm in length; well within the normal range of Fish consumed by Bottlenose Dolphins. Eight of the fish could be identified to specific level; six Sheepshead (Archosargus probatocephalus), one Black Chin Tilapia (Sarotherodon melanotheron) and one striped mojarra (Diapterus plumieri). Two other fish were tentatively identified as Tilapia (Cichlidae) and one as a Jack (Carangidae).

Sheepshead are a common Fish on the southern Atlantic and Gulf coasts of the US, but are not normally considered an important prey item for Dolphins. They are spiny members of the Perch order (Perciformes) and have a deeper body profile than the Fish usually favored by Dolphins, suggesting that they are a rather risky prey item, which Dolphins would normally avoid. Why the Dolphins of Indian River Lagoon are targeting this Fish is unclear. 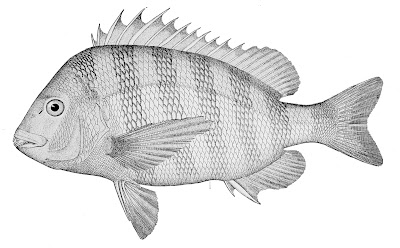 Tilapia (which are also Perciformes) are not native to Florida, but have been introduced via Fish farms and are becoming increasingly common in the lagoons. They are similar in shape to familiar prey Fish, but again have prominent spines which may facilitate them becoming lodged in the throats of Dolphins. 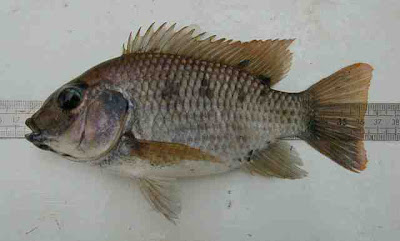 The precise reason for the high number of choking mortalities among Dolphins in Indian River Lagoon cannot be stated with confidence. One case could clearly be attributed to fishing tackle associated with the Fish, and in four other cases tackle was present but could not be established as the cause of death. Three Dolphins died as a result of consuming an unfamiliar, introduced fish, but far more died after consuming native Fish that Dolphins usually avoid; the reason for this change in feeding behavior is not clear.

See also The bite of the Megapiranha, To cull or not to cull? The Goliath Grouper in Floridan waters, Head-Butting in Giant Bumphead Parrotfish, Genetic diversity in Grey Whales and Satellite tracking Manta Rays off the coast of Mexico.