Asteroid 2000 TU28 passed by the Earth at a distance of about 9 884 000 km (25.7 times the average distance between the Earth and the Moon, or 6.61% of the distance between the Earth and the Sun), at about 4.45 pm GMT on Friday 23 October July 2020. There was no danger of the asteroid hitting us, though were it to do so it would not have presented a significant threat. 2000 TU28 has an estimated equivalent diameter of 130-410 m (i.e. it is estimated that a spherical object with the same volume would be 130-410 m in diameter), and an object of this size would be predicted to be capable of passing through the Earth's atmosphere relatively intact, impacting the ground directly with an explosion that would be 1800-18 000 times as powerful as the Hiroshima bomb. Such an impact would result in an impact crater roughly 2-7 km in diameter and devastation on a global scale, as well as climatic effects that would last years or even decades. 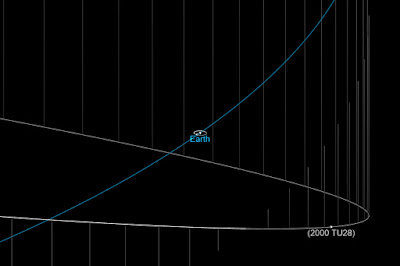 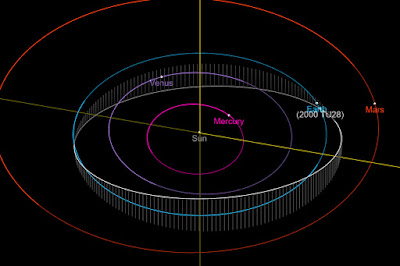 The orbit of 2000 TU28, and its current position. JPL Small Body Database.
2000 TU28 has a 406 day (1.11 year) orbital period, with an elliptical orbit tilted at an angle of 15.6° to the plain of the Solar System which takes in to 0.88 AU from the Sun (88% of the distance at which the Earth orbits the Sun) and out to 1.27 AU (1.27% of the distance at which the Earth orbits the sun). This means that close encounters between the asteroid and Earth are fairly common, with the last thought to have happened in April 2012 and the next predicted in June next year (2021). It is therefore classed as an Apollo Group Asteroid (an asteroid that is on average further from the Sun than the Earth, but which does get closer). As an asteroid probably larger than 150 m in diameter that occasionally comes within 0.05 AU of the Earth, 2000 TU28 is also classified as a Potentially Hazardous Asteroid.
See also... 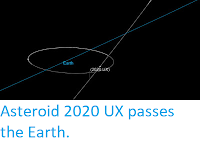 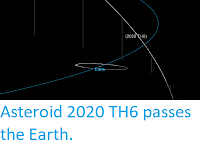 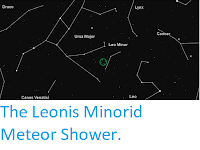 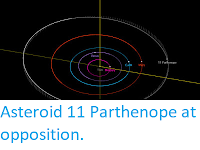 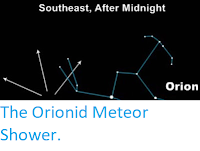 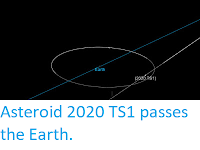