GJ 504b, a cold Jovian exoplanet in a wide orbit about a Sun-like star.

In the past two decades a large number of planets have been discovered orbiting other stars (exoplanets). The vast majority of these have been large planets orbiting close to their host stars, such planets being easier to detect due to the influence that their gravity has on the star. Planets further from their stars are harder to detect, as their gravity has less effect upon the star, and they have long orbital periods which will tend to mask this anyway. Such planets are more likely to be detected by direct imaging, though this will require separate observations over a long period of time to confirm the relationship with the host star.

In a paper published on the online arXiv database at the Cornell University Library on 12 August 2013 and in The Astrophysical Journal on 1 September 2013, a team of scientists led by Masayuki Kuzuhara of the Department of Earth and Planetary Science at The University of Tokyo and the National Astronomical Observatory of Japan and the Department of Earth and Planetary Sciences at the Tokyo Institute of Technology describe the detection of a superjovian planet orbiting the Sun-like star GJ 504 at a distance of 43.5 AU (i.e. 43.5 times the distance between the Earth and the Sun).

GJ 504 (or Gliese 504 or 59 Virginis) is 57 light years from Earth in the constellation of Virgo. It is a G-type Yelow Dwarf Star estimated to have 1.22 times the mass of the Sun, and to be about 160 million years old.Kuzahara et al. observed this star using the Subaru Telescope operated by the National Astronimical Observatory of Japan on Mauna Kea, Hawaii, between 26 March 2011 and 25 May 2012.

These observations enabled them to detect a smaller object close to the star, and establish that it is in fact gravitationally bound (orbiting) the larger body. The planet is named GJ 504b (Gliese 504b), making the parent body GJ 504A (when naming bodies in stellar systems other than our own, stars are indicated with an upper case letter and planets with a lower case letter. 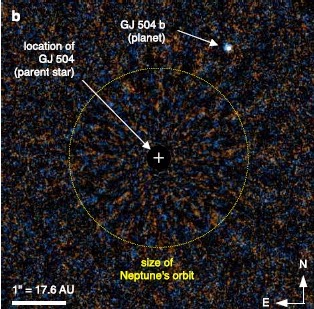 GJ 504b is thought to have a mass approximatelly four times that of Jupiter, making it the largest planet discovered by direct imaging (larger planets have previously been discovered by the influence of their gravity on their parent stars, but these have all been to close to their stars for direct imaging), and to orbit the star GJ 504A at a distance of 43.5 AU, making it amoungst the fursthest planets from its parent star yet discovered. The planet is thought to have an effective surface temperature of 510 k (237°C), making it the coolest superjovian lanet yet discovered.

See also Three giant exoplanets in very wide orbits around young stars, Kepler 63b; a giant planet in a polar orbit, A superjovian exoplanet directly imaged orbiting the A-class pre main-sequence star HD 95086, A fourth body in the KOI-13 system, and KOI-13b, a big, hot planet not a Brown Dwarf.