Earthquake near Worksop in northern Nottinghamshire.

On Sunday 15 July 2012, at 9.52 am British Summertime (8.52 am GMT) an Earthquake occurred in northern Nottinghamshire, England, roughly 4 km east of the town of Worksop, according to the British Geological Survey, who measured the quake as 1.7 on the Richter Scale at a depth of 1 km. This is too small to have caused any casualties or damage, indeed quakes of this size often go unnoticed, though on this occasion at least fourteen people in the nearby village of Carlton in Lindrick reported feeling shaking. 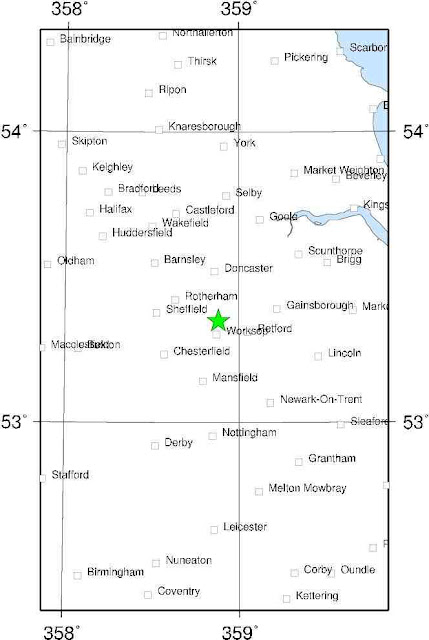 
This is the second small quake in Nottingham this month, and there have also been small tremors in neighboring South Yorkshire this year, events that may be connected. The precise cause of Earthquakes in the UK is often hard to determine, as quakes tend to be small and infrequent, and the islands are subject to tectonic stresses from a number of different sources, with no one dominant force. Firstly Britain, along with the rest of Eurasia, is being pushed to the east by the spreading of the Atlantic Ocean. Then Europe is being pushed from the south by the northward movement of Africa; this causes folding and uplift in the Alps, and frequent Earthquakes in the Mediterranean Basin, particularly in the east, but can lead to tremors elsewhere in Europe. Then there are lesser centers of expansion beneath the North Sea, the Rhine Valley and the Bay of Biscay, all of which exert some tectonic stress on the UK. Finally their is glacial rebound; until about 10 000 years ago, much of the north of the UK was covered by thick sheets of ice. This pressed the rocks of the lithosphere down into the underlying mantle, and, now the ice has gone, these rocks are slowly rebounding.

If you felt this quake, or were in the area but did not feel it (which is also useful information), you can report it to the British Geological Survey here.