All South American Rodents are classified as members of a single monophyletic group, the Caviomorpha. This appears to be most closely related to Rodents with African and Asian distributions; a single fossil from the Early Oligocene of Egypt has been described as a possible Caviomorph. This suggests the Caviomorphs colonized South America from Africa, though since there is no evidence the group ever reached Antarctica or Australia (continents that remained attached to South America longer than Africa during the breakup of the ancient continent of Gondwana), this probably occurred by rafting across a young, narrow, Atlantic Ocean.

Exactly when the Caviomorpha appeared is unclear; Rodent fossils are known from the Santa Rosa locality in Peru, which is thought to be Palaeogene in origin, but this date is not very confident. Rodents  have also been described from the mid-Eocene (roughly 41 million years old) Contamana Fauna from Peru. Middle Oligocene Caviomorph fossils are known from the Lacayani locality of Bolivia and a handful of sites in Patagonia. The group become abundant and widespread in Miocene deposits.

In a paper published in the American Museum Novitates on 20 July 2012, a team of scientists led by Ornella Bertrand of the Laboratoire de Paléontologie at the Institut des Sciences de l’Évolution at Université Montpellier II, and the Richard Gilder Graduate School at the American Museum of Natural History, describe two new species of Caviomorph Rodents from the Early Oligocene Tinguiririca Fauna from outcrops north and south of the Tinguiririca River near the town of Termas del Flaco in the Andean main range of central Chile, based upon partial remains of the animals jaws and teeth. 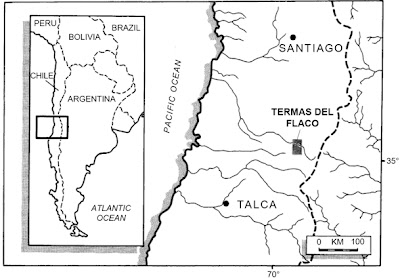 The locality where the new Caviomorph remains were discovered. Bertrand et al. (2012).

The first new species described is named as Andemys termasi, where Andemys means 'Andean Mouse' and termasi refers to the town of Termas del Flago, which is near to the site where the specimen was discovered. The species is described from a section of the right mandible, with several teeth intact. It is thought to be related to the modern Dasyproctidae (Agoutis and Acouchis). 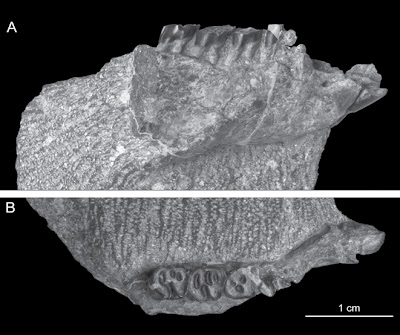 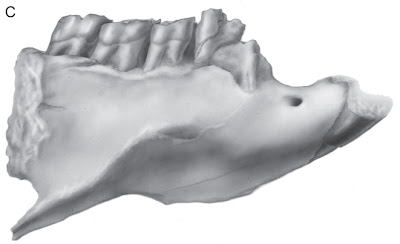 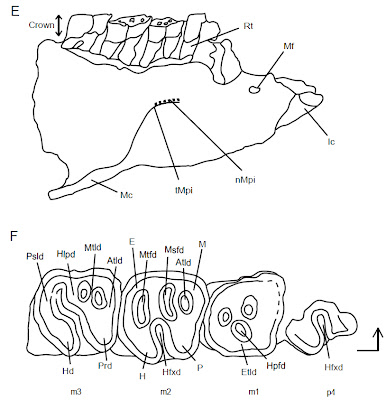 The second species described is placed in the genus Eoviscaccia, previously used to describe fossils from the Miocene of Argentina. It is given the specific name frassinettii, in honour of Daniel Frassinetti, a distinguished Chilean palaeontologist formerly of the Museo Nacional de Historia Natural in Santiago, who died in 2010. Eoviscaccia frassinettii is described from a partial right mandible, with several teeth present. It is thought to be related to the modern Chinchillas. 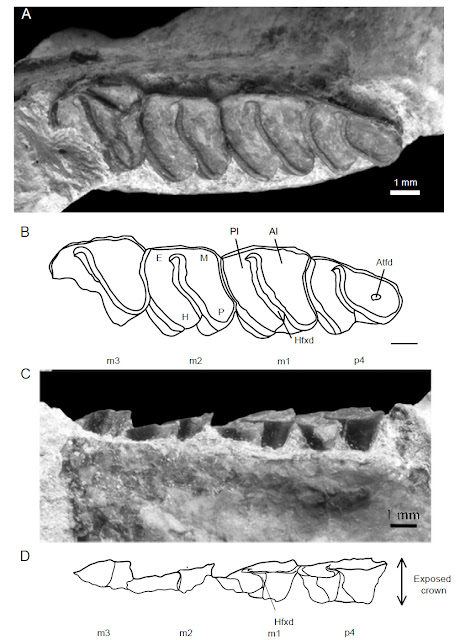 Both these new Rodents, and other mammal remains from the Tinguiririca Fauna show a condition called 'hypsodonty' in which the teeth have high crowns, and enamel that extends past the gum line. This provides extra protection against erosion of the teeth when chewing abrasive foods, and is generally associated with a diet of silica-rich grasses, rather than leaves.

The post-Cretaceous Cenozoic Era is split into two Periods, the Palaeogene (65.5-23.03 million years ago), comprising the Palaeocene and Eocene Epochs and the Neogene (23.05-2.558 million years ago), comprising the Miocene and Pliocene. Both these Periods have terrestrial vertebrate faunas dominated by Mammals and Birds, but the Neogene is distinguished by the spread of grasslands, and animals that could live on them, around the world. Consequently the development of hypsodont dentition occurred  repeatedly in different lineages of Mammals during this period.

The discovery of a hypsodont dominated fauna in the Oligocene of what is now the Chilean Andes suggests that grasslands may already have appeared there at this time. If so these would be the earliest known grasslands, possibly making Chile the place where grasslands first developed, and subsequently spread around the globe.

The origin of the grasslands has important climatic implications; grasslands pump less water into the atmosphere than woodlands, leading to a cooler, drier climate (water is a powerful greenhouse gas). The spread of the grasslands is generally credited with a steady cooling of the Earth's climate during the Neogene, culminating in the Pleistocene glaciations.

See also Earthquake in eastern Chile, A new Ground Sloth from the Late Miocene of Argentina, Three new species of Tapir from the Early Eocene of Pakistan, The Dwarf Pachyderms of Crete, Mammoths or Straight-Tusked Elephants? and Mammals on Sciency Thoughts YouTube.