Fishflies from the Middle Jurassic of Inner Mongolia.

Fishflies (Chauliodinae) are large flying insects, closely related to Dobsonflies. Their larval stages are aquatic, with the adults emerging as flying insects. Unlike some insects with a similar life-cycle, Fishflies do eat as adults, consuming a variety of animal prey, including small vertebrates (notably fish), as well as some plant matter. They lack the obvious jaws of the Dobsonflies, and males have Moth-like feathery antennae. They are found in many parts of the globe, but few areas have many species and (particularly in the Southern Hemisphere) widely separated species often seem closely related. For this reason they are sometimes considered living fossils since the existing species have apparently changed little since the breakup of the Gondwanan supercontinent. The actual fossil record of the group is not good, with the oldest known specimens coming from the Middle Jurassic. Estimates for the origin of the group vary from the Early Permian to the Early Jurassic.

In a paper published in the journal PLoS One on 6 July 2012, a team of scientists led by Xingyue Liu of the Department of Entomology at the China Agricultural University in Beijing, describe a new species of Fishfly from the Middle Jurassic of Inner Mongolia, plus some additional material of a previously described species.

The new species is named Eochauliodes striolatus, where Eo- means dawn or beginning, -chauliodes means possessing prominent teeth (a common component of the names of Fishflies) and striolatus means having narrow stripes, a reference to the patterning on the wings. It comes from the Bathonian-Callovian (i.e. roughly 164.7 million years old) Jiulongshan Formation near Daohugou Village in Ningcheng County, Inner Mongolia. Both adult and larval forms are described. 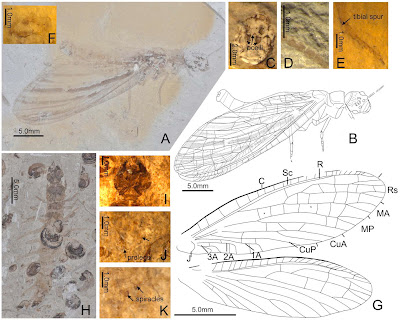 This means that both adult and larval stages for two species of Fishfly have been described from the Jiulongshan Formation near Daohugou Village, though the criteria for matching the larval forms to the adults is unclear.

See also A new species of Antlion from China, Snakeflies in amber from the Early Cretaceous of northern Spain and New species of Owlfly from Morocco.