Ichneumon Wasps are specialist parasites of other insects; typically they lay their eggs in the larvae of other insects, and their larvae then consume their hosts from the inside as they grow, eventually killing the host as they emerge. They are sometimes called Scorpion Wasps due to their elongated abdomens and formidable-looking ovipositors (egg laying organs), which resemble the stings of Scorpions, although they do not actually poses stings. This lifestyle, while gruesome to human observers, is clearly highly successful, with the Ichneumon Wasps being one of the most numerous and widespread groups of insects, with over 60 000 described species.

The new species is named from a single female Wasp, black, and 12.6 mm in length. It is placed within the subfamily Metopiinae, which are specialist parasites of Caterpillars, in a new genus, Ojuelos, after the municipality of Ojuelos de Jalisco, the capitol of Jalisco State, where the Wasp was discovered, and given the specific name juachicus, after the city of Juachí, where it was found. 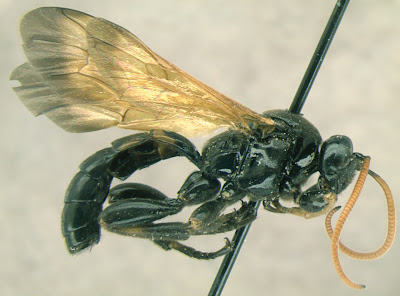