Snakeflies (or Camel Flies)are a group of carnivorous flying insects related to the Lacewings, Antlions and Alderflies. They have long life cycles, with a number of larval stages, but still feed as adults. Modern Snakeflies are found throughout Europe and Temperate Asia, and in North America west of the Rockies, but they are more widespread in the fossil record, which dates back to the Early Jurassic. In the Early Cretaceous they have previously been described from three localities in East Asia and one in Brazil.

In a paper published in the journal Zookeys on 25 June 2012, a team of scientists led by Ricardo Pérez-de la Fuente of the Departament d’Estratigrafia, Paleontologia i Geociències Marines at the Facultat de Geologia at the Universitat de Barcelona, describe a number of Snakeflies preserved in amber from the Albian (Early Cretaceous, 112-99.6 million years ago) of northern Spain. 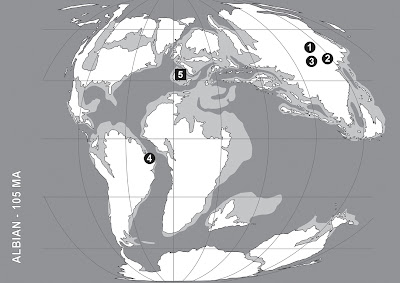 The amber is thought to have originated in Coniferous forests on coastal and riverine plains close to the Atlantic. These forests are thought to have been prone to forrest fire, due to the inclusion of what appear to be charred plant fibers in the amber. The exact nature of the trees that produced the resin from which the amber formed is unclear, but Araucarians (Monkey Puzzles), Yews, Cypresses, Pines, Podocarps, Ginkos, Cheirolepids, Cycads, Gnetophyts, Tree Ferns and Mirovian trees are known to have been present as well as understory plants including Club-mosses, Ferns, Cycads, Ginkos, Bennettitales and early Flowering Plants.

The first of the complete specimens is named as Amarantoraphidia ventolina, meaning 'unfading Raphidia' (Raphidia is a genus of extant Snakeflies) and 'ventoline' a fairy of Spanish legend. It is a female slightly over 6 mm in length (small for a Snakefly). 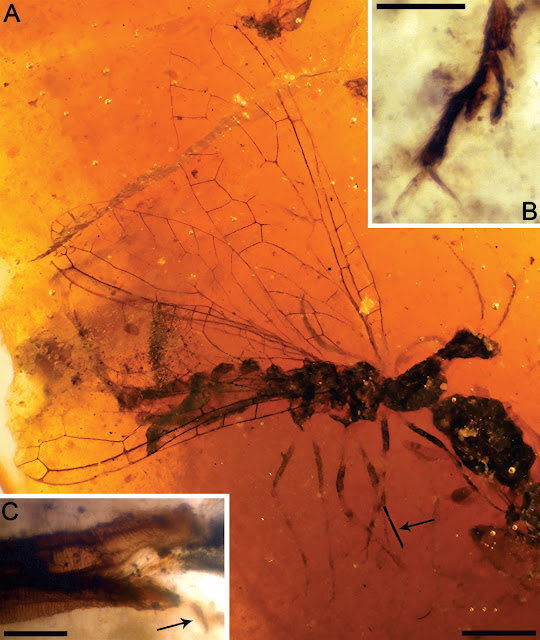 Amarantoraphidia ventolina. (A) Complete specimen, scale bar is 1 mm. (B) Left metatarsi showing bilobed third tarsomere, scale bar is 0.1 mm. (C) distal portion of ovipositor, note its dense annulation; arrow points to a gonostylus, scale bar is 0.1 mm. Pérez-de la Fuente et al. (2012).
The second complete specimen is named Alavaraphidia imperterrita, from Álava, the Spanish for amber and Raphidia, and 'imperterritus', Latin for fearless. It is a female 5.7 mm in length, lacking wings (which leaves the danger of it being described elsewhere from wings alone, common in palaeoentomology). 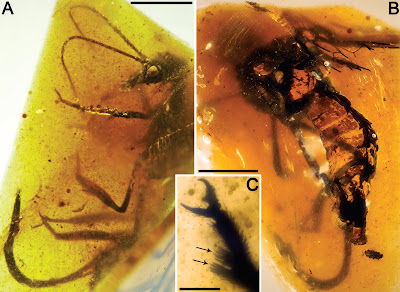 The third intact specimen is placed in the previously described species Cantabroraphidia marcanoi. There are a great number of charred wood fibers in the matrix, preventing any detailed study of the specimen. The three species named from wings only are Baissoptera? cretaceoelectra, that is to say probably in the pre-described genus Baissoptera, the specific name meaning Cretaceous amber in Greek; Necroraphidia arcuata, where 'Necroraphidia' means 'dead Raphidia' and 'arcuata' means bent in Latin; and Styporaphidia? hispanica, probably in the genus Styporaphidia, with a specific name meaning 'Spanish'. 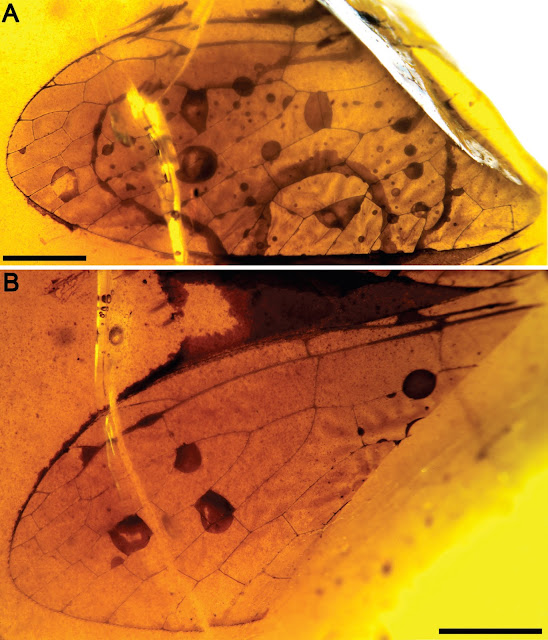 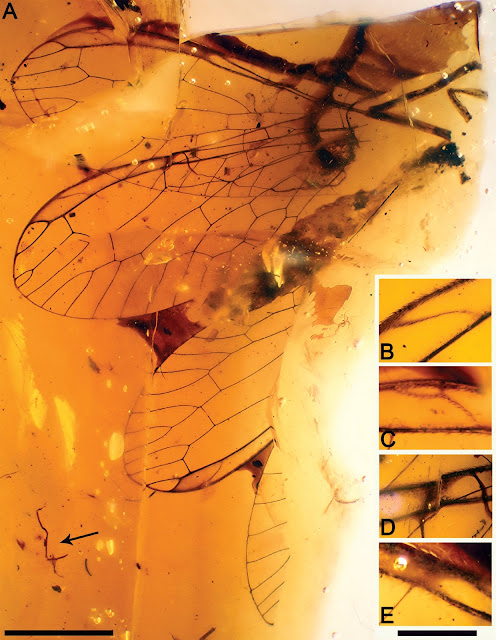 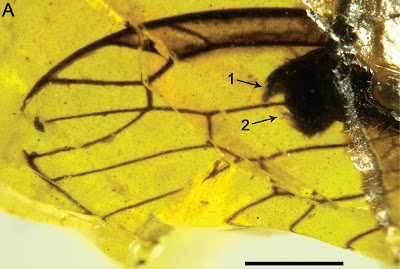