New species of Whitecap Shrimp Goby from the Western Pacific.

Gobies are small, elongate Fish related to Perches. They are a highly successful group with other 2000 species and are found across the globe. There are both marine and freshwater Gobies, as well as one group, the Mudskippers, that can survive out of water for extended periods of time. The smallest known Vertebrates are species of Goby under 1 cm in length as adults, though there are several contenders for the official title of smallest species.


A number of groups of Goby have independently developed symbiotic relationships with other species, one notable example of this being the relationship between some Gobies and burrowing Shrimps. Such Gobies live in the burrows of blind, or at least poorly sighted Shrimps and act as lookouts for predators when both burrow residents are out foraging. For this reason they are sometimes called Watchmen Gobies.

One such species is the Whitecap Shrimp Goby, Lotilia graciliosa, which was first described in 1960 by Wolfgang Klausewitz in the Red Sea. Subsequently a group of Japanese scientists reported the presence of a second population of the Fish in the Western Pacific in 1981. Whitecap Shrimp Gobies are sometimes sold as aquarium fish, though they seldom do well as their symbiotic Shrimps tend not to survive in captivity, and the fish do not usually last long without them.

In a paper published in the journal Zootaxa on 2 July 2012, Koichi Shibukawa of the Nagao Natural Environment Foundation, Toshiyuki Suzuki of Kawanishi-midoridai Senior High School and Hiroshi Senou of the Kanagawa Prefectural Museum of Natural History describe a new study of the Whitecap Shrimp Goby, in which they conclude the two populations are in fact different species.

Shibukawa et al. carried out a study of the fine structure of the sensory canals (loosely nostrils, though in Fish these structures are only used for chemoreception, or 'smell', and not for respiration) and pores of the head, and came to the conclusion these were quite different in the two populations. For this reason they describe the Western Pacific Whitecap Shrimp Goby as a separate species, Lotilia klausewitzi, named in honour of Wolfgang Klausewitz. 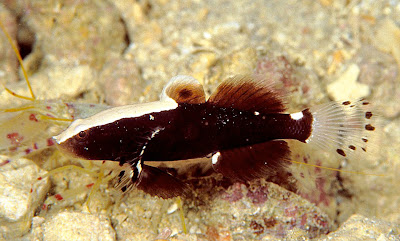