Over 60 feared dead in Darfur gold mine collapse.

It is feared that more than 60 miners have lost their lives in a mine collapse in the remote Darfur region of northwest Sudan. The incident happened at the Jebel Amir mine in the north of the region on Monday 29 April 2013, but news of the incident only reached Khartoum on Thursday 3 May. The mine has a central shaft descending 60 m from the surface, with a number of side gantries. At the time of the incident 66 miners were officially working in the mine, but the real number present is likely to have been somewhat larger. Another 10 miners apparently descended into the pit to attempt to rescue their colleagues and were also trapped. 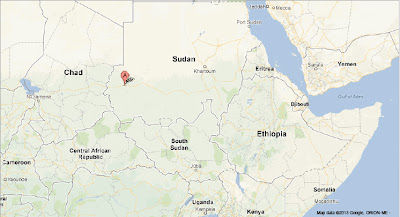 The approximate location of the Jebel Amir mine. Google Maps.

Gold has become Sudan's principle earner of foreign currency since the independence of South Sudan in 2011, which cut the country's oil revenues by 75%. This has provoked a goldrush in northern Darfur, where dozens of mines produce around 15 tonnes of gold per year. Despite the economic importance of the industry it is almost totally unregulated, with very little safety precautions in the mines and frequent fighting between rival ethnic groups. In January and February 2013 around 400 people were killed in ethnic clashes around Jebel Amir, with around 10 000 more being displaced by the fighting.