A Magnitude 4.4 Earthquake occurred at a depth of 9 km in southern Quebec, roughly 67 km northwest of Ottawa slightly before 9.45 am local time (slightly before 1.45 pm GMT) on Friday 17 May 2013, according to the United States Geological Survey. This is a large Earthquake for the region, and while no damage or injuries were recorded, it was felt as far away as New York and Vermont States. 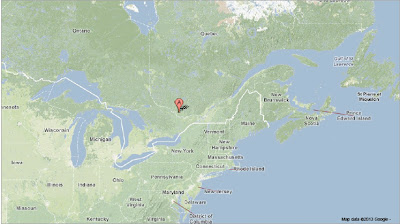 The location of the 17 May 2013 Quebec Earthquake. Google Maps.


The quake took place within the Western Quebec Seismic Zone, an area of intraplate seismic activity underlying part of southwest Quebec and southeast Ontario. The precise cause of tectonic activity here is unclear, with different opinions being held by geologists in the area. The area is underlain by a number of ancient deep faults associated with ancient mountain-building episodes, though it is unclear how these relate to the quakes. Alternatively the activity may be related to the Great Meteor Hot Spot an area of magmatic upwelling that originates deep beneath the Earth's tectonic plates, and therefore moves separately of them. The hotspot is currently located to the south of the Azores, though it has been active for at least 125 million years, moving across southwest Canada and the eastern United States before crossing the Atlantic Ocean. Finally the events could be the result of glacial rebound; until about 10 000 much of northern North America was covered by a thick layer of glacial ice, which pushed the rocks of the lithosphere down into the underlying mantle. The ice as now long since melted, but the rocks are still springing back into their original position, causing the occasional Earthquake in the process.