On Sunday 5 May 2013, slightly after 4.05 pm British Summertime (slightly fter 3.05 pm GMT), the British Geological Survey recorded a Magnitude 1.8 Earthquake at a depth of 4 km, close to the small town of Lostwithiel in Cornwall (roughly halfway between Liskeard and St. Austel). Such small quakes are not dangerous, and are quite often not noticed at all, though this one was felt in Par, 5 km to the southwest of the epicenter. 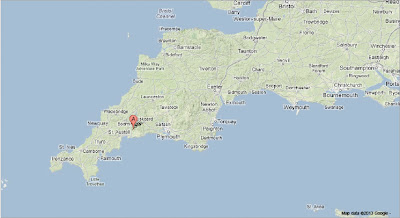 The location of the 5 May 2013 Cornish Earthquake. Google Maps.

The precise cause of Earthquakes in the UK can be hard to determine, with most events probably being the result of more than one source of tectonic stress. The UK is being pushed to the east by the expansion of the Atlantic Ocean, and to the north by the impact of Africa into Europe from the south. Britain is also affected by lesser areas of spreading beneath the North Sea, Rhine Valley and Bay of Biscay.

Finally there is glacial rebound; until around 10 000 years ago much of the north of the UK was covered by a thick layer of glacial ice, which pushed the rocks of the British lithosphere down into the underlying mantle. This ice is now gone and the rocks are (slowly) springing back into place, causing the occasional Earthquake in the process. This is not an obvious potential cause of Earthquakes in Cornwall, which is not thought to have been glaciated during the last Ice Age, however the UK is essentially a single piece of rigid crust, with the effect that upward movement in the north of the country can often lead to downward movement in the south.

Witness accounts can help scientists to understand Earthquakes and the geological processes that cause them. If you felt this quake (or if you were in the area and did not, which is also useful information) then you can report it to the British Geological Survey here.

See also Earthquake in Somerset, Earthquake off the Dorset Coast, The Portsmouth Earthquake of 14 July 2011, The Cornish Tsunami and The Newton Abbot Earthquake.