The effect of parasitic Nematodes on European Eels.

European Eels, Anguilla anguilla, have a complex life-cycle; they hatch from eggs in the Sargasso Sea in the southwest North Atlantic, then migrate to European inland waterways where they grow for up to 25 years before returning to the Sargasso to breed. This life-cycle exposes leaves them exposed to a number of human-related threats, including overfishing, habitat loss and pollutants, and the species has suffered a dramatic decline in numbers since the 1970s, to the alarm of conservationists. Since the 1980s the species is also known to be widely suffering from infection from an invasive parasitic Nematode worm, Anguillicoloides crassus, which probably entered Europe with imported Eels from Southeast Asia, and against which the European Eel apparently has no natural defenses.

Anguillicoloides crassus infects the swim-bladders of Eels, and from where it drains blood. The Nematode has a much shorter life-cycle than the Eel, and an infection will purge itself since eggs are laid outside the host, but multiple infections can damage or even destroy the swim-bladder, removing the Eels ability to control its own buoyancy and killing it. Anguillicoloides crassus is not reliant on the Eels to survive, it can use a variety of hosts including many types of Fish and Crustaceans, so a reserve of Nematodes is likely to remain in the environment even if the Eels become locally extinct, so that new Eels recolonizing an area will be infected immediately. 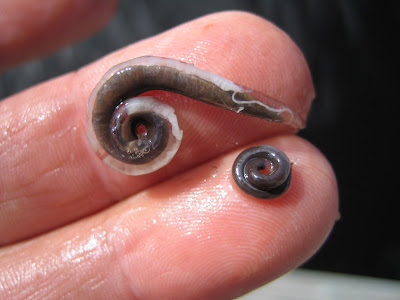 Eels raised in the laboratory and infected with Anguillicoloides crassus, tend to be underweight compared to other Eels of the same age. Such infected Eels are approximately the same length as uninfected Eels, but are notably thinner. Based upon this studies of Eels in the field have tended to use weight-to-length ratio as a proxy for Nematode infection, though this has never actually been tested in wild Eels.

In a paper published in the Proceedings of the Royal Society Series B Biological Sciences on 16 January 2013, a team of scientists led by François Lefebvre of Station Biologique de la Tour du Vala, describe the results of a study of Eels in a complex of brackish lagoons in the Rhône River delta, in which Eels were actively checked for Nematode infection and signs of past infection (scarring of the swim bladder), and the rate of infection was compared to the weigh-to-length ratio of the Eels.

Surprisingly this study found that the relationship between infection rate and age appeared to be reversed in wild Eels compared to laboratory-raised Eels; fatter Eels showed signs of bearing a heavier parasite load that thinner Eels, suggesting that the model used in many previous studies is completely wrong and must be reassessed. Lefebvre et al. suggest that while infection in the laboratory is deliberate and not influenced by diet, this is not the case with wild Eels, which become infected by consuming Nematode eggs, thus making more voracious Eels more likely to become infected, while giving Eels that consume less, either through more selective feeding or for other reasons, a better chance of avoiding the Nematodes.