Haliaeetus leucogaster: Observation of a novel hunting method being used by the White-bellied Sea-eagle to target Flying Foxes.

Birds of Prey, Accipitriformes and Falconiformes, also commonly known as Raptors, are known diurnal predators of Bats, Chiroptera. Some of the most frequent predation records by Raptors on Bats involve Fruit Bats, Pteropodidae, of the genus Pteropus, possibly owing to their relatively frequent diurnal activity and in aggregated open roosting places of these Bats. Indeed, predation attempts on Flying Foxes, Pteropus spp. by large Raptors, including the White-bellied Sea-eagle, Haliaeetus leucogaster, have been previously reported in the scientific literature. Risk of predation by diurnal Raptors is an important factor influencing the timing of evening emergence of Flying Foxes from day roosts. More detailed and longterm observations, however, appear to be scanty, and this type of predator-prey interaction is still poorly understood. Also, all such observations of attacks by diurnal Raptors on Flying Foxes have only been reported from Australia and the Pacific, with no records for Southeast Asia.

In a paper published in the Journal of Bat Research & Conservation on 20 February 2020, Sheema Abdul Aziz of Rimba Research, Marcus Chua of the Lee Kong Chian Natural History Museum of the National University of Singapore, and the Department of Environmental Science and Policy at George Mason University, and Gopalasamy Reuben Clements, also of Rimba Research and the Department of Biological Sciences and Jeffrey Sachs Center on Sustainable Development at Sunway University, report an opportunistic observation from Peninsular Malaysia on 28 September 2017, during which they observed a pair of White-bellied Sea-eagles employing a novel hunting technique to predate on the Island Flying Fox, Pteropus hypomelanus, on Tioman Island, off the east coast of Peninsular Malaysia, in the South China Sea.

The Island Flying Fox is found on islands of South and Southeast Asia ranging from the Maldives, Andaman and Nicobar Islands, the Philippines, Melanesia, Sulawesi, Papua New Guinea, and islands off the Malay Peninsula and Sundaland. It is listed as a species of Least Concern on the  International Union for the Conservation of Nature's Red List of Threatened Species, with a decreasing population trend. n Peninsular Malaysia, where this observation was recorded, the species is listed as Endangered and Protected.

The predation attempt occurred around 11.50 am local time, when a single Sea-eagle snatched a Flying Fox directly from its roost tree by the beach. The site was a known roost of the species on the western coast of the island, where the Bats roost on several coastal tree species next to the beach. Although the catch event was outside of their line of sight, Abdul Aziz et al. heard a cacophony of vocalisations (probably from the Flying Fox colony), and later observed the Sea-eagle Flying out to sea clutching a struggling Flying Fox in its talons. Once the Sea-eagle was about 100 m out from the shore, it dropped the Flying Fox into the sea while another Sea-eagle flew in circles a short distance away. 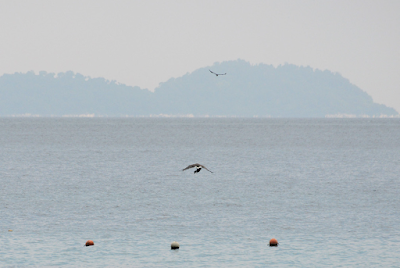 A White-bellied Sea-eagle holding an Island Flying Fox in its talons over the sea while another Eeagle flew a short distance away. Abdul Aziz et al. (2020).

After the Flying Fox was dropped into the sea, Abdul Aziz et al. observed that instead of drowning, it was able to swim at the surface using synchronised forearm strokes back towards the beach. Although there is no known record of the swimming ability of this species in the scientific literature, Flying Foxes are known to swim in a manner similar to other swimming Bats. The pair of Sea-eagles then flew back to land, and perched in a tree by the beach. They were clearly observing the Flying Fox as it swam.

An Island Flying Fox, struggling to get ashore after being dunked in the sea by a White-bellied Sea-eagle. Abdul Aziz et al. (2020).

The Flying Fox took 20 mins to swim close to shore through the waves; however, at this point it was snatched again by one of the Sea-eagles, which proceeded to fly a little further out to sea and repeated the action of dropping the Flying Fox into the water. The Flying Fox then swam back again and started crawling up the beach. The movement of the Bat on land was slow and laboured, and its left patagium (wing membrane) was punctured. At this point Abdul Aziz et al. were forced to cut their observations short as they had to move to another site, and left their observation spot near the beach. It was thus unclear whether the Sea-eagles repeated this treatment, and if so, how many times further.


An Island Flying Fox, struggling to get ashore after being dunked in the sea by a White-bellied Sea-eagle for a second time. Abdul Aziz et al. (2020).

Informal enquiries with nearby residents on the island who were present during the observation confirmed that such predation attempts involving this sequence of events happened quite frequently at this particular roost, and appeared to be common at this location. Although the main food of the White-bellied Sea-eagle includes Fish and Sea Snakes in the Thai-Malay Peninsula, these Birds also feed on Crustaceans, Birds, Reptiles, and Mammals, including Pteropus Bats. The success rate of this predation technique is unknown. Although Abdul Aziz et al. cannot tell whether the Sea-eagles were taking turns, it is possible that they may have been hunting as a pair using the sea to tire out, or potentially drown, a large prey animal with the strength and ability to fight back, and potentially even making use of the Bats’ swimming ability to achieve this. White-bellied Sea-eagles are known to exhibit cooperative hunting behaviour. The closely-related Bald Eagle, Haliaeetus leucocephalus, has also been recorded hunting in numbers to tire or weaken Ducks in the water, or taking turns to haul heavy prey. 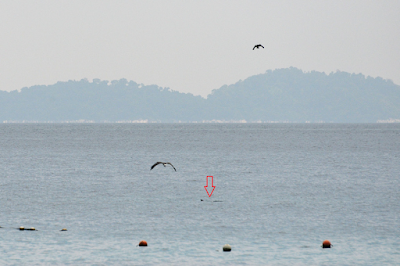 The Island Flying Fox on the surface of the water (red arrow) after it was dropped by the Sea-eagle holding it. Abdul Aziz et al. (2020).

Such intriguing predation behaviour by Sea-eagles on Flying Foxes appears to be a novel scientific record that has never before been reported in the literature. White-bellied Sea-eagles generally forage by quartering, high soaring, or still hunting from a perch, and then attacking in a glide or dive to snatch prey from ground, trees, or water surface. A literature search using Web of Science and Google Scholar returned no notes on the hunting behaviour that we observed. Furthermore, there are no records of White-bellied Sea-eagles feeding or hunting on land in the Thai-Malay Peninsula. Although this particular Flying Fox colony has since moved to a different roost location, as of early 2019, it is worthvconducting more systematic observations to determine whether this predator-prey interaction is still occurring there and elsewhere, and to attempt to better understand it to determine its impact on the Bat population. 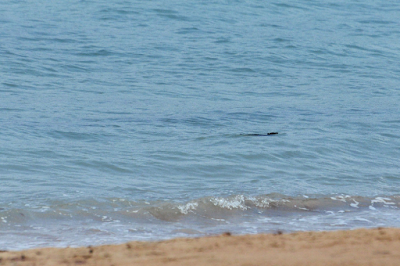 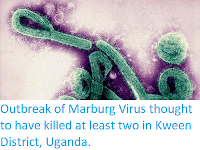 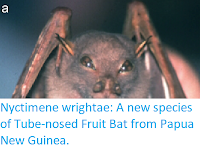