Parioscorpio venator: A new species of Scorpion from the Early Silurian Waukesha Biota of Wisconsin, USA.

Scorpions include some of the earliest animals to have become fully terrestrial. The earliest forms are Silurian in age, but because most Palaeozoic species are represented by only rare, fragmentary material, much of their early evolutionary history is speculative. Divergent views regarding the habitat of Palaeozoic Scorpions have been published. Some have argued that the earliest scorpions were marine, whereas others have claimed a terrestrial origin. It has also been argued that some Paleozoic Scorpions were secondarily aquatic. Arguments concerning whether early Scorpions were terrestrial or marine have been based principally on stratigraphic context nd preserved anatomical features. Anatomical evidence used to interpret habitat include the presence or absence of feeding structures used to liquify prey (coxapophyses or stomathecae), chemosensory organs (pectines), mechanosensory organs (trichobothria), and respiratory structures (book gills or book lungs). In some Palaeozoic species, inferred locomotory stance, deduced from limb morphology, also has been applied as evidence of habitat. All Silurian Scorpion fossils, and indeed most from the Palaeozoic, have been recovered from nearshore to marginal-marine strata. Such deposits provide ambiguous evidence of habitat, as bodily remains of arthropods are easily transported after death. Likewise, inferring locomotory stance and habitat from limb morphology in a fossil Scorpion can yield equivocal results. Pectines, stomathecae, trichobothria, and respiratory structures are rarely preserved as fossils, and in many examples the non-preservation of such structures likely has a taphonomic origin.

In a paper published in the journal Scientific Reports on 16 January 2020, Andrew Wendruff of the Department of Biology and Earth Science at Otterbein University, Loren Babcock of the School of Earth Sciences at Ohio State University, Christian Wirkner of Allgemeine & Spezielle Zoologie at Universität Rostock, and Joanne Kluessendorf and Donald Mikulic of the Weis Earth Science Museum at the University of Wisconsin-Fox Valley, describe the exceptionally preserved remains of a new Early Silurian Scorpion from the Waukesha Biota of Wisconsin, USA.

The Waukesha Biota is a fossil lagerstätte producing exceptionally well preserved fossils from outcrops of the Brandon Bridge Formation in Waukesha and Milwaukee counties, Wisconsin. The Biota includes biomineralised and non-biomineralising or lightly skeletonised taxa, of which macrofossils are assigned to at least 12 Metazoan phyla. Articulated Trilobites, Ostracodes, Conulariids, Graptolites, non-biomineralised Arthropods and ‘Worms’ dominate the biota. Atypical marine conditions are suggested by the near lack of Echinoderm, Brachiopod, Mollusc and Coral remains. Fossils are preserved in a 12 cm layer of thinly laminated, fine-grained dolostone deposited during a transgressive episode over the eroded dolostones of the Schoolcraft and Burnt Bluff formations Recent biostratigraphic assessment of the Waukesha Lagerstätte shows that conodonts present include Pterospathodus eopennatus, the eponymous indicator of the Pterospathodus eopennatus Superzone, indicating an age of between 437.5 and 436.5 million years. Sedimentary traps which formed along the base of the scarp in the intertidal or supratidal zones received remains of organisms washed in from nearby areas. These sedimentary traps have so far not yielded remains of unambiguous, fully terrestrialised animals or plants. Organisms were preserved through replication
in microbial mats which coated and cemented bodily remains in place. Microbial processes are implicated in the precipitation of thin phosphatic coatings on non-biomineralised or lightly skeletonised remains leading to exceptional preservation.

The new Scorpion is named Parioscorpio venator, where 'Parioscorpio' means 'progenitor-Scorpion' and 'venator' means 'hunter'. It is described from two substantially complete specimens. are preserved as a combination of thin organic film and replication by thin calcium phosphate coating. Parioscorpio venator is now the earliest known scorpion 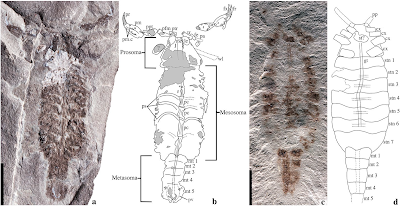 Parioscorpio venator is characterised by a small exoskeleton showing a unique array of characters. Based on earlier studies some of these characters, such as compound eyes, are primitive (plesiomorphic) for Arachnids. Other characters, such as clawed pedipalps (the second pair of appendages attached to the cephalothorax of most Arachnids) and a narrow metasoma (tail) terminating in a stinger, are derived (apomorphic). A mesosoma comprised of seven segments, which is observed uniquely in Parioscorpio venator, is interpreted as a primitive characteristic. Palaeozoic Scorpions show a trend toward reducing the number of tail segments through time. Six tail segments are present in two Silurian species that are younger, Proscorpius osborni and Eramoscorpius brucensis. Most extant and extinct Scorpions have five tail sternites, a condition that had evolved by at least the Carboniferous Period. The large, anterolateral eyes, and anteromedial position of the small medial eyes, also are regarded as plesiomorphic features, as they are present in younger Silurian species such as Allopalaeophonus caledonicus, Palaeophonus nuncius, and Proscorpius osborni. Pectines, which are chemosensory structures present in all extant scorpions, are unknown in most Palaeozoic forms including Parioscorpio venator. This is probably a taphonomic artefact, as pectines are easily lost after death or moulting. In other aspects of external morphology Parioscorpio venator fits within the range of morphological features exhibited among other, more derived, Scorpion taxa. A telson bearing an expanded area for a poison vesicle and a stinger is an apomorphous condition for Scorpions. The holotype of Parioscorpio venator preserves an incomplete telson, which is folded under the fifth metasomal segment. The proximal portion shows a swelling close to the articulation with the metasoma, inferred to be a poison vesicle, but the more terminal stinger is not evident.

Both specimens of Parioscorpio venator show details of internal anatomy. In the paratype, parting of the rock through the fossil reveals a medial structure interpreted as the gut tract, and it resembles that of extant Scorpions. It is a narrow, simple tube extending from the prosoma to the metasoma. It originates in the anterior prosoma, slightly forward of the inferred position of the mouth.

Detailed studies of the central architecture of the circulatory and respiratory systems in present-day Scorpions reveal a strikingly similar arrangement to the preserved structures in Parioscorpio venator. The pericardium, which surrounds and houses the heart, comprises a series of narrow, medial hourglass-shaped structures in the mesosoma. Strut-like pulmo-pericardial sinuses project laterally from the pericardium. In some extant Scorpions, these internal medial structures are reflected externally on the dorsal cuticle along with the tergite boundaries. This is evident on P. venator as well. In extant scorpions, the pulmo-pericardial sinuses connect the book lungs with the circulatory system. The book lungs oxygenate the hemolymph (‘blood’) and deliver the oxygenated hemolymph to the pericardium. Wendruff et al. infer that the organs of the respiratory-cardiovascular architecture were evolutionarily conservative. 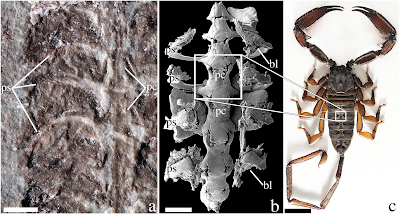 Among extant Chelicerates, terrestrial forms such as Scorpions tend to be restricted to processing oxygen from air (e.g., by means of book lungs). However, marine Xiphosurans (Horseshoe Crabs), which normally extract oxygen from water by means of external book gills, are nevertheless capable of respiration when they journey onto land to spawn. The circulatory and respiratory organs of Xiphosurans are equally complex to those of Scorpions and this may contribute to their ability to respire in air and survive on land. Presumably, ancient Xiphosurans and Arachnid ancestors had a similar capability to venture onto land.

Anatomical details preserved in Parioscorpio venator suggest that the physiological changes necessary to accommodate a marine-to-terrestrial transition in Arachnids occurred early in their evolutionary history. Whether Parioscorpio venator was a fully terrestrial Arthropod is uncertain. The close similarity of its preserved pulmonary-cardiovascular structures with those of extant Scorpions and Horseshoe Crabs hint at the possibility of extended stays on land. 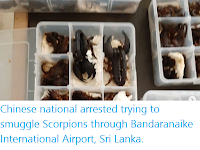 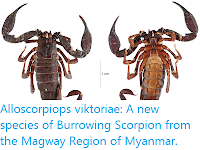 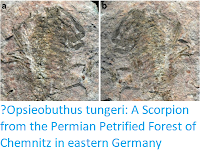 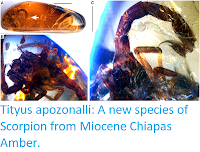