Landslide in the Solomon Islands kills at least four.

Four people have been confirmed dead and three more are missing following a landslide on the island of Guadalcanal in the Solomons on Thursday 12 March 2020. The event happened at Lambi on the west coast of the island amid heavy rains and flooding associated with a low-pressure system that swept across the islands. Landslides are a common problem after severe weather events, as excess pore water pressure can overcome cohesion in soil and sediments, allowing them to flow like liquids. Approximately 90% of all landslides are caused by heavy rainfall.

The approximate location of the 12 March 2020 Guadalcanal landslide. Google Maps.

The Solomon Islands has a tropical climate, with a wet season that runs from November to April and a dry season that lasts from May to October. However, the dry season is not completely arid, typically still receiving about 100 mm of rain per month, and this year has been exceptionally wet, with some of the heaviest rain ever recorded in the islands falling in the past week, and local authorities are warning there is a danger of further landslips and flooding.

Low presure systems are caused by solar energy heating the air above the oceans, which causes the air to rise leading to an inrush of air. If this happens over a large enough area the inrushing air will start to circulate, as the rotation of the Earth causes the winds closer to the equator to move eastwards compared to those further away (the Coriolis Effect). This leads to tropical storms rotating clockwise in the southern hemisphere and anticlockwise in the northern hemisphere. These storms tend to grow in strength as they move across the ocean and lose it as they pass over land (this is not completely true: many tropical weather systems peter out without reaching land due to wider atmospheric patterns), since the land tends to absorb solar energy while the sea reflects it. 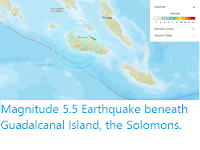 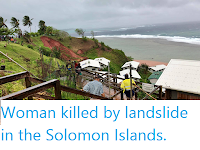