Three people have died and several more have been injured after a landslide hit a car in East Sikkim District, Sikkim, on Tuesday 10 March 2020. The incident happened at about 1.45 pm local time, with the landslide hitting the vehicle and knocking it into a ravine. The dead have been identified as driver Suraj Chhetri from Sikkim, and passengers Jharna Saha, 54, and Hrishpriya Ghose, 13, both tourists from West Bengal, the injured as Taposh Saha, 46, Narayan Ghosh, 52, Kunjala Shah, 35, Debjani Saha, Mithu Ghosh, Rhishi Ghosh, 8, and Raja Saha, also tourists from West Bengal. 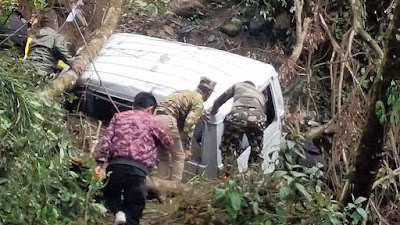 Vehicle knocked from a road into a ravine by a landslide on 10 March 2020. The Telegraph.

Sikkim is located in the Indian Himalayas, and area notorious for landslides, though the majority of these occur in the Monsoon Season, and are caused by the relentless heavy rains of that season. Landslides are a common problem after severe weather events, as excess pore water pressure can overcome cohesion in soil and sediments, allowing them to flow like liquids. Approximately 90% of all landslides are caused by heavy rainfall. However, the spring period is not associated with such heavy rains, and the problems they bring. This time of year does have its own problems though, as it is the season during which the ice and snow of water melts. This can lead to flood events even without rainfall, as well as the destabilisation of slopes where soft sediments have previously been held in place by frozen pore water, leading to landslides. 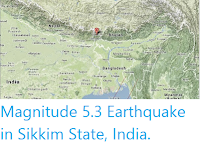 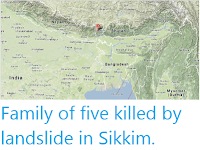 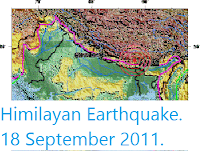