Assessing the diet of extinct animals is problematic; a broad estimate can be made from the animals dentition, which can indicate that an animal ate meat (bladed teeth), plant material (grinding teeth), fish (pointed teeth) or shellfish (crushing teeth); but beyond this it is very hard to guess the eating habits of long dead animals. One thing that can indicate clearly what an ancient animal was eating is to find preserved specimens with intact stomach contents, although such specimens are rather rare, and found only in deposits with exceptional preservation.


In a paper published in the journal PLoS One on 29 August 2012, a team of scientists led by Lida Xing of the Department of Biological Sciences at the University of Alberta describe two specimens of the large Compsognathid Dinosaur, Sinocalliopteryx gigas, from the Jianshangou Beds of the lower Yixian Formation (part of the Jehol Biota lagerstatte), from Liaoning Province, China, both of which have intact stomach contents.

The first specimen is a more-or-less complete skeleton, with a mass of what appear to be feathers and the hind foot and lower limb of a small Dromaeosaurid Dinosaur, possibly Sinornithosaurus. These contents are arranged in a rough 'C' shape, suggesting this may be the contour of the gut. 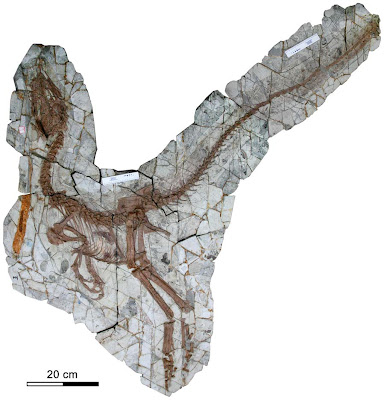 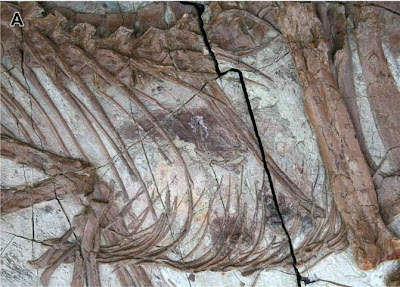 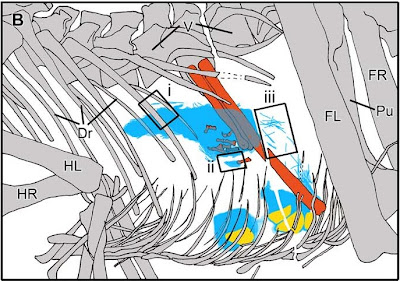 The second specimen is more fragmentary, but also has well preserved intact stomach contents, suggesting that the fragmentation occurred after the specimen had been lithified. This appears to show the partial remains of two Birds, probably belonging to the species Confuciusornis sanctus. These are reasonable intact, and show the same level of acid etching from the stomach's digestive juices, suggesting that they were consumed more-or-less whole and in rapid succession. 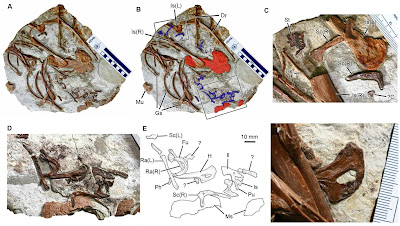 A terrestrial predator feeding on Birds at fist seems surprising, but this is behaviour known in a number of modern predators, including various members of the Cat family, as well as Foxes, some Snakes and Monitor Lizards. Such behaviour is usually indicative of a stealth predator, able to get within striking distance of its prey before it is detected.