The large Clam Laternula elliptica is found in coastal waters across the Southern Ocean, around the tip of Patagonia and all around the coast of Antarctica. It is considered a keystone species in Antarctic ecosystems, forming an appreciable percentage of the total biomass. It lives infaunally, buried in mud at depths of up to 50 cm, and filtering food from the water column. It faces few predators due to an absence Antarctic animals capable of digging it out, though it is known to be targeted by a type of Fish, Trematomus hansoni, which bites off its siphons.

In a paper published in the journal PLoS One on 28 September 2012, a team of scientists led by Elizabeth Harper of the Department of Earth Sciences at the University of Cambridge discuss the results of a study into damage to the shells of Laternula elliptica, which suggests that iceberg scour is a major source of damage to these animals.

The team sampled Clams from seven sites around Antarctica, and analyzed the shells of living animals for damage and repair, looking for signs of predation or chemical dissolution as well as physical damage. All of the Clams were sampled at depths to great for them to be damaged by storm or tidal turbation. 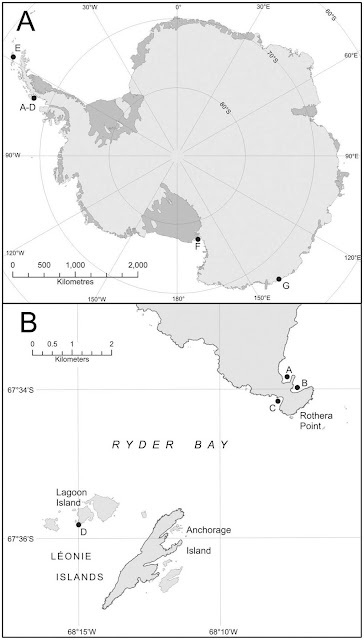 Map showing the locations from which the Clams were excavated. Harper et al. (2012).

Harper et al. found shells showing signs of recovery from severe crushing at all sites, despite the fact that the Antarctic lacks any known predator which attacks Clams in this way, and the Clams being recovered from sites not targeted by trawl-fishers. The incidence of damaged Clams varied greatly with from 1.7% to 74.2% of the Clams showing signs of having been crushed at different sites. 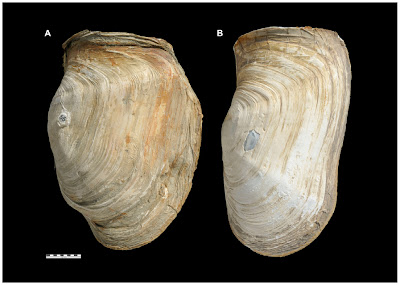 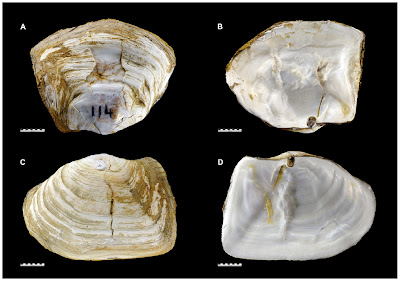 The damage was most frequent at sited where scouring of the seafloor by icebergs was common, and rarest where permanent pack ice makes scouring by free-floating icebergs unlikely. Clams have been observed being excavated by such scouring and being forced to rebury themselves, suggesting that this scouring was the source of the damage. Harper et al. also noted that Clams in shallower water have thicker shells than those in deeper water, and while the genetics of the Clams is not understood, suggest this is most likely to be as a result of the Clams reacting to their environment by secreting more or less shell, rather than strains of Clams with different shell-thicknesses and depth-preferences being present at numerous sites around Antarctica.