The deepest evolutionary split in the jawed vertebrates (Gnathostomes) is that between the Sharks (Chondrichthyes) and Bony Fish (Osteichthyes), with all terrestrial vertebrates forming a subgroup within the bony fish. The skeletal structure of Sharks is quite different to that of other jawed vertebrates, with a skeleton comprised almost entirely of cartilage, which has little preservational potential. On the other hand Sharks produce new teeth and shed old ones throughout their lives, and in addition have a coating of mineralized scales with a tooth-like composition. These teeth and scales have excellent preservational potential, with the effect that Sharks have a very long and well documented fossil record, but that little is known of the anatomy of most fossil Sharks.

In a paper published in the journal PLoS One on 28 May 2015, a team of scientists led by John Long of the School of Biological Sciences at Flinders University, the Department of Earth and Marine Sciences at The Australian National University and Geosciences at Museum Victoria describe the first known Shark remains from the Late Devonian Gogo Formation of Western Australia.

The Gogo Formation is noted for the production of exceptional three-dimensionally preserved Fish skeletons within calcareous nodules which can be released by acid washing techniques which dissolve the calcareous matrix but leave the skeletal material intact. These Fish are thought to have lived on reefs but fallen into deep basins between reef fronts when they died, where oxygen deprived calcium rich water slowed decomposition and coated the skeletons in layers of calcite, which preserved them against deformation when subsequently buried by layers of sediment.

The specimen described by Long et al. comprises a set of disarticulated but clearly associated remains comprising both left and right Meckel's cartilages, nasal cartilage, ceratohyal, hyomandibula, basibranchial cartilage, both scapulocoracoids, and associated teeth and scales. This is described as Gogoselachus lynbeazleyae, where ‘Gogoselachus’ means Gogo-shark and ‘lynbeazleyae’ honours Lyn Beazley of the University of Western Australia for her ‘contribution to scientific progress in Western Australia’. The specimen is thought to be the first known acid-prepared mineralized Devonian Shark remains. 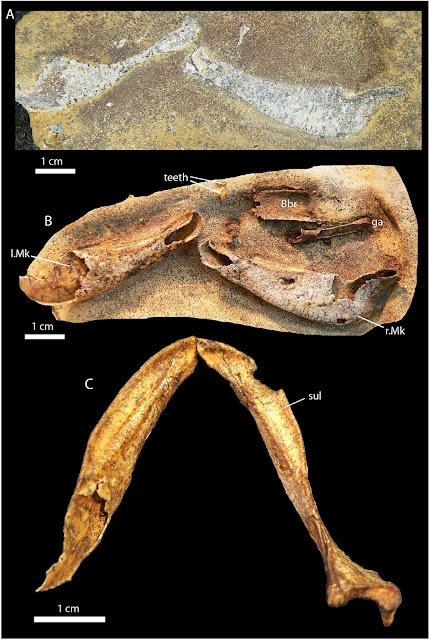 The cartilage of Gogoselachus lynbeazleyae is tessilated; that is to say it contains layers of small, mineralized plates, which added to the strength of the tissue without reducing its flexibility. Such tessilated cartilage is considered diagnostic of the Chondrichthys (Sharks and Rays) and has been found in specimens as ancient as the Early Devonian, however such tissues are rarely preserved in Devonian Sharks, as most known specimens are preserved in shale, a medium which does not tend preserve histological details. Interestingly the calcite present in the tesserae of Gogoselachus lynbeazleyae appear too be non-prismatic and are surrounded by a cartilage matrix with elongate lacunae, unlike the tesserae of modern Sharks which have fibrous connections between them. 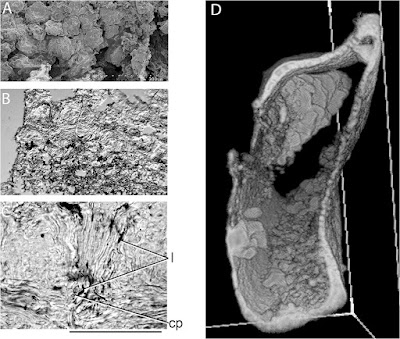 Sharks teeth and scales from the Devonian of Estonia and the Leningrad Region of Russia.
The Main Devonian Field outcrops on the northwestern East European Platform in Estonia, Latvia, Lithuania, northern Belarus... 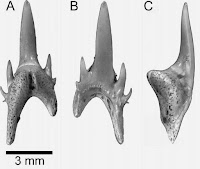 Sharks and Rays of the Eocene Canadian High Arctic.
Palaeontological studies of the Arctic during the Early-to-Middle Eocene have revealed a world in which the ice-free Arctic Ocean was surrounded by lush warm-temperate rainforests, inhabited by creatures such as Alligators, Turtles and Hippo-like Mammals. The... 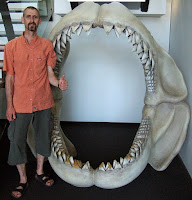 The demise of the Megashark.
The Giant Shark, Carcharocles megalodon, is one of the more charismatic creatures of the recent fossil record, a relative of modern Mackerel Sharks that is thought to have been able to reach about 18 m in length, known from the Middle Miocene to the end of the Pliocene, with some claims of the species persisting into the Pleistocene. It is interpreted to have had a life-style similar to the modern Great White Shark, which preys...