South Africa is the largest producer of greenhouse gasses on the African continent, and one of the largest producers worldwide. This is largely due to the country's dependence on coal to produce energy, with over 80% of electricity in South Africa being produced from coal burning power stations. Aware of the problems associated with greenhouse gas production, the nation has set itself the ambitious target of generating 40% of its energy needs from renewable sources, such as wind, solar, or hydroelectric plants, by 2030. This target is made harder by rising demand for electricity, with a rising population and many populations denied electricity under the former apartheid regime now wanting to be connected. Geothermal energy, energy generated by geological processes, is not usually considered as a viable option in South Africa, as the nation lies far from any active volcanic field, the most obvious source of geothermal energy, but the country could still potentially generate some of its power from low-energy geothermal sources, which rely on temperature gradients within deep rocks, rather than active heat eruption at the surface.

Low enthalpy geothermal energy production relies on temperature differences within geological formations rather than direct heating by magma or hydrothermal sources, and can produce useful amounts of electricity at temperature gradients as low as 40°C per km. This does not necessarily require the presence of plutonic intrusions from the Earth's interior, in many cases the presence of radiogenic elements such as uranium within the rock strata produces sufficient heating for low enthalpy geothermal plants to operate.. 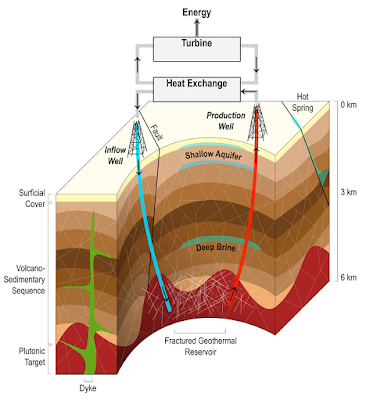 Much of South Africa is underlain by the Kaapvaal Craton, an ancient subcontinental mass of lithospheric material that averages 40-50 km in thickness, but is 250 km deep at its thickest. This ancient mass at first seems to have rather poor potential for geothermal energy production of any kind, but the craton is in fact made up of several large blocks of more ancient material that were fused together during the Archean Eon (4.0-2.5 billion years ago). Thus, while the majority of the Kaapvaal Craton is highly thermally stable, something which has discouraged investigation of the potential for geothermal energy in the area, it is cross-cut by a number of ancient geological sutures, with rather different properties.

These sutures are the remains of ancient orogenic belts, bands of volcanic activity similar to that seem around the Pacific Rim today. The geological process associated with such structures tend to concentrate heavier elements within certain strata. This has led to the high concentrations of gold and other precious metals that drive the South African mineral industry, and also higher concentrations of radiogenic metals such as uranium, which at high enough densities can raise the temperatures of the deposits that host them. 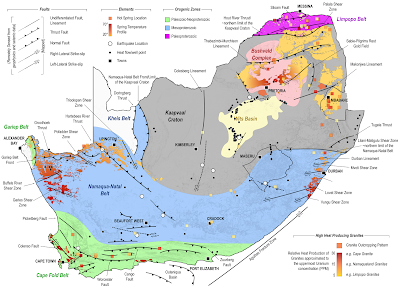 Overview of the major tectonic structures and zones across South Africa with the locations of significant earthquake focal mechanisms and inferred structures related to these events. Locations of the various data sources used within this study (e.g. hot springs and temperature measurement points) and high heat producing plutonic rocks are also highlighted. Note that the Namaqua-Natal Belt probably continues beneath the Cape Fold Belt as far as the offshore Agulhas Fracture Zone. Dhansay et al. (2017).

Dhansay et al. obtained measurements of temperature in South African rocks at depths of between 2 and 5 km from previous studies, as well as inferring deeper temperatures from hot springs at the surface, and the presence of deep faults from Earthquake data, and used this data to build up a map of temperature gradients across the country. 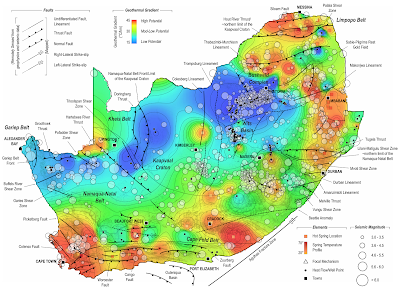 
Using this data Dhansay et al. were able to identify a number of regions with geothermal temperature gradients high enough to support potential low-enthalpy geothermal energy generation, most notable along the the Colesberg, Thabazimbi-Murchison and Makonjwa Lineaments, ancient tectonic zones associated with early stages of the assemblage of the Kaapvaal Craton, which are also associated with a number of recent seismic events, and a number of hot springs, which may be due to reactivation of ancient faults with a northeast to southwest orientation. 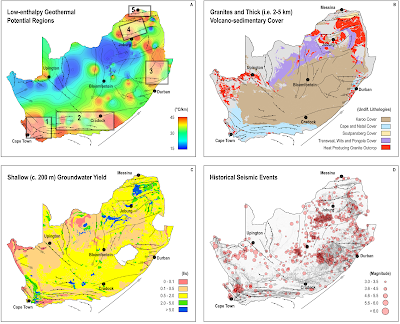 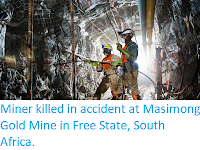 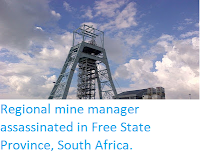 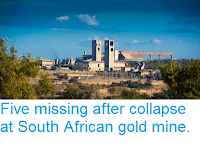 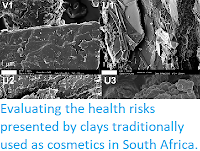