Japanese proposal to allow the resumption of commercial Whaling defeated at the International Whaling Commission's biannual meeting in Florianopolis, Brazil.

A proposal by Japan that Whale stocks had recovered to the extent that commercial Whaling could be resumed was rejected at the  International Whaling Commission's biannual meeting in Florianopolis, Brazil, on 14 September 2018. Japanese negotiators had argued that the recovery of many populations of Whales means that they would be able to withstand some commercial hunting, that the international moratorium on the activity is intolerant of other views, and that the inability to harvest Whales commercially threatened Japan's long-term food security. However, the proposals were rejected by 41 votes to 27, with two abstentions, with opponents to the measure claiming that policing of legal Whaling had in the past proved almost impossible, with species after species being hunted to the brink of extinction, and that there is little need (or demand) for Whale meat as a food in the twenty first century. 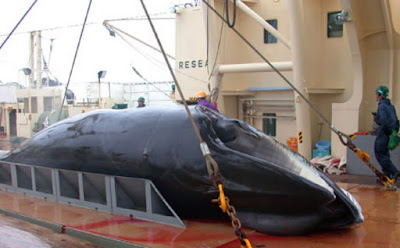 A Whale hunted for scientific research by a Japanese vessel. Institute of Cetacean Research.

Japan is still allowed to harvest 333 Minke Whales, Balaenoptera spp., each year, officially for scientific research, but critics of the policy claim that as the meat of these animals is sold, the policy is effectively a cover for commercial Whaling. The nation had been allowed to take up to 1000 Minke per year until 2012, when the International Court of Justice ruled that such a large harvest could not be justified as scientific research. Minke are also hunted legally by Norway, and Iceland where Minke Whales are hunted for domestic consumption and Fin Whales, Balaenoptera physalus, for meat which is exported to Japan. In South Korea Minke Whales caught as by-catch can be sold, with critics claiming that this policy also covers for commercial Whaling. 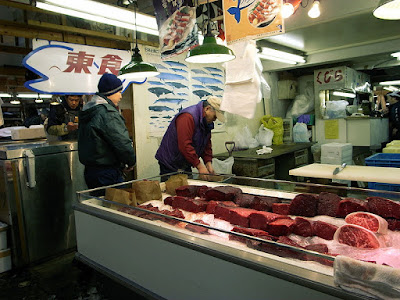 Whale meat on sale at the Tsukiji Fish Market in Tokyo. Stefan Powell/Save On Whale/Wikimedia Commons.

Whaling is also permitted using indigenous methods by some countries, including the Faroe Islands, where Long-finned Pilot Whales, Globicephala melas, and Atlantic White-sided Dolphins, Lagenorhynchus acutus, are targeted, with about 800 animals being killed each year, by driving them onto beaches and spearing them, Greenaland, where a variety of Whale species are targeted, Alaska, where indigenous groups hunt about 500 Beluga Whales, Delphinapterus leucas, and about 40 Bowhead Whales, Balaena mysticetus, each year, the Russian Far East, where indigenous groups take about 140 Grey Whales, Eschrichtius robustus, Canada, where several indigenous groups take a small number of Whales in the Arctic Circle each year, the Caribbean, where several groups in Grenada, Dominica, St Lucia and the Grenadines are allowed to take small numbers of Short-finned Pilot Whales, Eschrichtius robustus, Pygmy Killer Whales, Feresa attenuata, Spinner Dolphins, Stenella longirostris, and Humpback Whales, Megaptera novaeangliae, and the Indonesian islands of Lembatta and Solor, where Sperm Whales, Physeter macrocephalus, and Dolphins are hunted. None of these groups sell Whale meat commercially, though some is traded or bartered within communities (Greenland has been repeatedly accused of breaching this rule by selling Whale meat to tourists, and exporting Whale meat to Denmark). 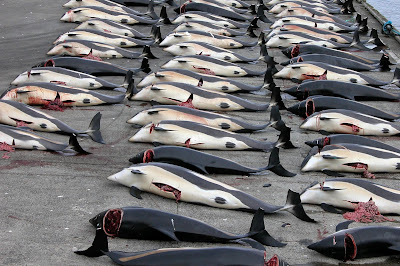 Other than this, all Whaling activities worldwide have been banned since 1985, when a moratorium on the taking of Whales agreed by the International Whaling Commission in 1982 came into place. However, in many cases this is not because Whales are considered to be endangered, but because of the difficulties involved in policing the industry, and considerations about the intelligence and emotional well being of Whales, which Japan and some other nations argue is outside the original remit of the commission. Of the two species of Minke Whale the Common Minke Whale, Balaenoptera acutorostrata, is considered to be of Least Concern under the terms of the International Union for the Conservation of Nature's Red List of Threatened Species, while the Antarctic Minke Whale, Balaenoptera bonaerensis, is considered to Near Threatened, with this diagnosis based upon concerns about disappearing ice sheets in its Antarctic environment rather than the threat presented by Whaling (and is largely based upon data gathered by scientists attached to the Japanese Whaling fleet). 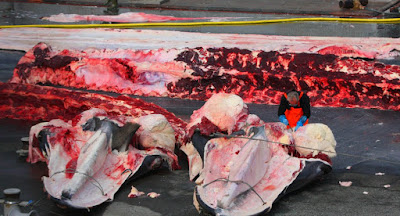 Five species of Whale are currently considered to be Endangered under the terns of the Red List, the Sei Whale, Balaenoptera borealis, the Blue Whale, Balaenoptera musculus, th Fin Whale, the North Atlantic Right Whale, Eubalaena glacialis, and the North Pacific Right Whale, Eubalaena japonica, all of which are large, slow breeding, Baleen Whales, which are not thought to have recovered from former commercial Whaling. Only one of these species, the Fin Whale, is still hunted, with Iceland setting quotas of between 150 and 200 Fin Whales to be taken each year, the meat of which is exported to Japan. However, this hunt is often disrupted by environmental groups such as Sea Shepherd, which sunk two Icelandic Whaling vessels in 1986, and which has succeeded in completely disrupting hunts in other years. 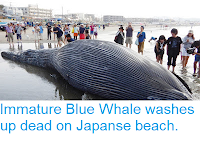 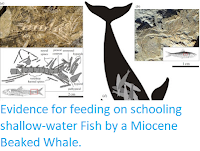 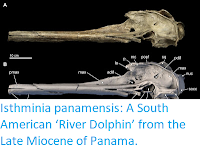