The Eta Aquariid Meteor Shower will peak before dawn on Wednesday 5 May 2021, with up to 45 meteors per hour at it's peak, radiating from the constellation of Aquarius. The radiant point of this shower does not spend long above the horizon in the Northern Hemisphere at this time of year, but is often a good display in the Southern Hemisphere. The Eta Aquarids are potentially visible between 19 April and 28 May, but are extremely hard to spot away from the peak of activity. However, the peak of this years activity falls between the Third Quater Moon on 3 May and the New Moon on 11 May so there should still be some good opportunities for meteor spotting. 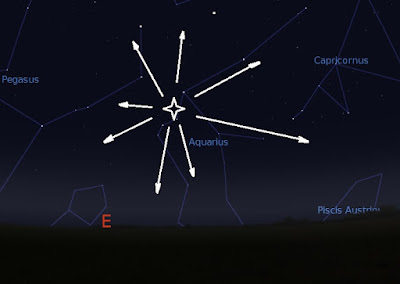 The radiant point (point from which the meteors appear to radiate) of the Eta Aquariid Meteors. Universe Today.
Meteor showers are thought to be largely composed of material from the tails of comets. Comets are composed largely of ice (mostly water and carbon dioxide), and when they fall into the inner Solar System the outer layers of this boil away, forming a visible tail (which always points away from the Sun, not in the direction the comet is coming from, as our Earth-bound experience would lead us to expect). Particles of rock and dust from within the comet are freed by this melting (strictly sublimation) of the comet into the tail and continue to orbit in the same path as the comet, falling behind over time. 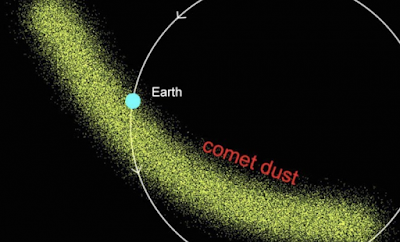 The Earth passing through a stream of comet dust, resulting in a meteor shower. Not to scale. Astro Bob.
The Eta Aquarid Meteor  Shower is caused by the Earth passing through the trail of Halley's Comet, where it encounters thousands of tiny dust particles shed from the comet as its icy surface is melted (strictly sublimated) by the heat of the Sun. Halley's Comet only visits the inner Solar System every 75 years (most recently in 1986 and next in 2061), but the trail of particles shed by it forms a constant flow, which the Earth crosses twice each year; in May when it causes the Eta Aquarid Meteor Shower and in October when it causes the Orionid Meteor Shower. 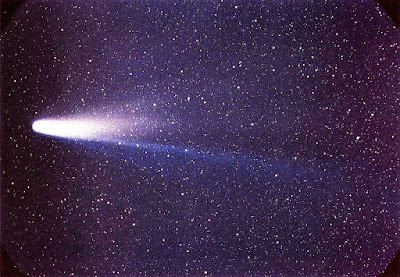 Halley's Comet imaged on 8 March 1986 from Easter Island. William Liller/International Halley Watch Large Scale Phenomena Network/NASA/Wikimedia Commons.
Halley's Comet has been observed repeatedly and recognised as the same recurring object since at least 240 BC. However, it takes its modern name from the eighteenth century English Astronomer Edmund Halley, who determined the comet's periodicity in 1705.
Halley's Comet completes one orbit every 75.32 years (27 509 days) on an eccentric, orbit tilted at 162° to the plane of the Solar System (i.e. a retrograde orbit, at an angle of18° to the plane of the Solar System, but travelling in the opposite direction to the majority of the objects in the Solar System), that takes it from 0.56 AU from the Sun (59% of the average distance at which the Earth orbits the Sun, and inside the orbit of the planet Venus) to 35.1 AU from the Sun (35.1 times as far from the Sun as the Earth, and outside the orbit of the planet Neptune). As a comet with a period of more than 20 years but less than 200 years, Halley's Comet is considered to be a Periodic Comet, and a Halley-type Commet.

The orbit of Halley's Comet. Nagual Design/Wikimedia Commons.
Halley's Comet was visited by the European Space Agency's Giotto Probe in and Russian Vega 1 and Vega 2 probes March 1986, which were able to determine that the nucleus of the comet was only 15 km across, although it was surrounded by a coma about 100 000 km in diameter, made up of fragments of dust and ice released from the surface as it was heated by the Sun, causing the ices on its surface to sublimate (turn directly from solids to gasses), and that this material comprised 80% water, 10% carbon monoxide, 2.5% methane and ammonia, as well as trace amounts of more complex hydrocarbons, iron and sodium. 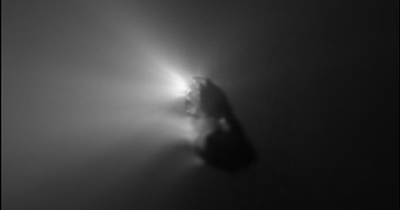 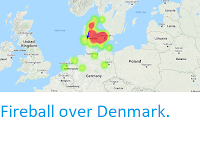 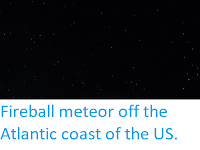 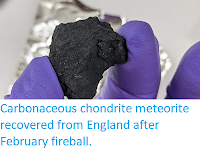 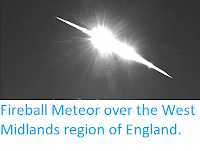