Fairy rings are known from many parts of the world. They consist of a ring on grassy ground inside which the grass is stunted, but with particularly lush grass around the perimeter. The rings start small and grow over time, eventually spreading out so much they are lost into the landscape, with the grass recovering in the centre. At certain times of year mushrooms can be seen growing in the lush grass, which reveals the cause of the rings; fungal colonies spreading out from the point where the first spore landed, draining nutrients from within the ring and carrying the to the spreading edge, where the growing fungus uses them, and the grasses mop up the excess.

The arid grasslands of the Namib Desert have a similar phenomenon, dubbed 'Fairy Circles' to emphasize their similarity. Like Fairly Rings, Fairy Circles contain an area of stunted, or more often dead, grass, surrounded by a ring of more luxurious grass, but unlike Fairy Rings they do not appear to grow, appearing fully grown, persisting for some years then vanishing again. The cause of Fairy Circles remains obscure; no microbiological or chemical differences between the soil inside and outside the rings has been found. Grasses placed in open bottomed pots within the circles wilt and die, but those in closed pots are unaffected. The Circles are found in grasslands on the fringes of desserts throughout Namibia, from the borders of Angola in the north to the South African border in the south; it is likely that they extend into other countries, but do not seem to have been studied outside Namibia. They are larger in the north, reaching 10 m in diameter near the Angolan border, but seldom exceeding 2 m near the South African border.

In a paper published in the journal PLoS One on 27 June 2012, Walter Tschinkel of the Department of Biological Science at Florida State University, conducts a review of our knowledge of Fairy Circles, and adds data from a number of new sources. 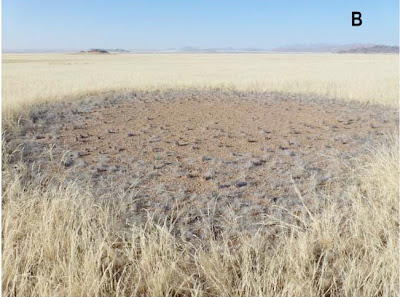 Tschinkel used data from Google Earth, satellite photography obtained from Digital Globe Imaging, areal photographs from Namib Sky Balloon Safaris and ground data gathered in the Namib Rand Nature Reserve. He found that the Circles took about five years to form; during with time the grass sickened and died across the whole of the interior at a more-or-less even rate, the Circles did not in any way grow like a fairy ring. Once formed the Circles lasted on average for about 40 years then were recolonized by grasses. It was possible to detect the location of former Circles because the wind would hollow out sand from the middle of the grass-free Circles, creating a depression. Sometimes these old Circles would come back to 'life' forming 'Lazarus Circles', but this was rare. The Circles would sometimes 'grow' by the formation of a new part-Circle at the edge of a current Circle, though this appeared to be a new Circle forming partially overlapping the old. Circles could sometimes be detected in areas with very sparse grass coverage.

Tschinkel does not offer any explanation for the Circles, but was able to rule out some previously offered ones. The most obvious explanation is a fungal or other microbial agent, as with Fairy Rings, but the growth pattern does not match this and no such agent could be found. Another popular explanation is a chemical agent, such as fumes from a subterranean hydrothermal seep, though again no such agent could be found. It has been suggested that the activities of ground-dwelling Termites might be responsible, but no connection between the Circles and Termites has been found. 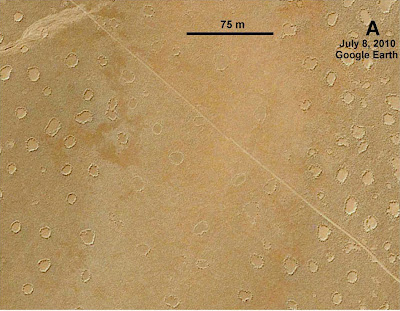 Google Earth image of an area of Fairy Circles. Tschinkel (2012).

See also The oldest animals - Pre-Ediacaran Sponges from Namibia(?), Mysterious object falls from the sky in Namibia and Snowfall in Namibia