Hurricane Sandy, the eighteenth named tropical storm in the Caribbean this season, struck Jamaica five miles east of the capitol, Kingston, arriving from the south (tropical cyclones almost always move away from the equator, and therefore almost always hit Jamaica and neighboring nations from the south), causing widespread flooding and disruption to services. One man was reported to have been killed when his house was destroyed by a flooding-induced landslide, and a woman in nearby Haiti was swept away by a swollen river.


Local power supplier The Jamaica Public Service Company reported that 70% of its customers had lost there electricity supplies (many Jamaicans cannot afford electricity). Attempts to arrange an evacuation of the worst hit parts of the island were largely ignored due to widespread looting after previous events, with only around 1000 people reportedly seeking cover in official shelters. Instead authorities have encouraged people to remain in their own homes, imposing a curfew across much of the affected area, though it is unclear how this could be enforced. A police officer has reportedly been shot an wounded by looters in the Craig Town area of Kingston.

Jamaica, and neighbors Haiti and the Dominican Republic, are particularly vulnerable to the effects of hurricanes due to week infrastructure, which leaves them vulnerable to damage caused by flooding, high winds and landslips. The area has received between 300 and 500 mm of rainfall, causing widespread flooding, and high winds have reportedly damaged many buildings. Several areas of Jamaica have also reported influxes of crocodiles into urban areas, driven from coastal mangrove forests by high water levels. 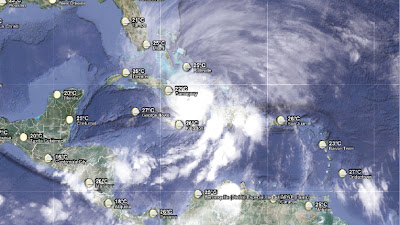 The hurricane has moved north from Jamaica, making landfall on Cuba near Santiago. Though it has grown slightly in intensity it is expected to cause less disruption due to better infrastructure and preparedness on the island, where large numbers of tourists and residents have been evacuated from vulnerable areas, and emergency generators have been deployed to compensate for power outages. The US naval base at Guantanamo Bay is also on high alert, and the Bahamas and Florida are preparing for the storm to hit.

Hurricanes, and tropical cyclones in general, are caused by solar heating of the air over the sea. This causes the air to rise, and air from the surrounding area to rush inwards, causing strong winds. In tropical areas such events can cover such large areas that they are effected by the Earth's rotation; centrifugal force causes winds to move counterclockwise in the northern hemisphere and clockwise in the southern. This in effect causes a ring of lower pressure around the center (eye) of the hurricane, with each millibar drop in pressure causing a 1 cm rise in sea-level. This sea swell, combined with high rainfall caused by evaporation of sea water in the heated center, causes most of the destruction associated with hurricanes, not the more obviously destructive high winds.

See also Earthquake in the Dominican Republic, Satellite tracking Manta Rays off the coast of Mexico, Volcanic activity on Soufrière Hills, Montserrat, How the Deepwater Horizon oil spill effected wildlife on the Gulf of Mexico and BP hopes to have reached settlement with thousands of Gulf Oil Spill victims.