Tropical Storm Son-Tinh kills at least 24 in the Philippines.

Tropical Storm Son-Tinh hit the Philippines on Wednesday this week, 24 October 2012, causing widespread flooding in south and central parts of the country, and leaving at least 24 people dead, and another 15 000 displaced to emergency shelters. The storm left the country on Friday, crossing the South China Sea, and growing in strength to a Category 3 Typhoon. It is expected to hit northern Vietnam and southern China in the next two days (28-29 October). 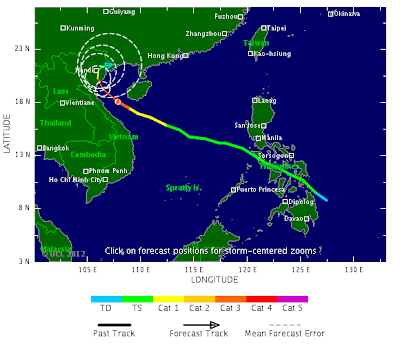 Map showing the path and strength of Typhoon San-Tinh to date (27 October 2012), and the predicted future path of the storm. Tropical Storm Risk.


Tropical storms are caused by the warming effect of the Sun over tropical seas. As the air warms it expands, causing a drop in air pressure, and rises, causing air from outside the area to rush in to replace it. If this happens over a sufficiently wide area then the inrushing winds will be affected by centrifugal forces caused by the Earth's rotation (the Coriolis effect). This means that winds will be deflected clockwise in the northern hemisphere and anti-clockwise in the southern hemisphere, eventually creating a large, rotating Tropical Storm.

Despite the obvious danger of winds of this speed, which can physically blow people, and other large objects, away as well as damaging buildings and uprooting trees, the real danger from these storms comes from the flooding they bring. Each drop millibar drop in air-pressure leads to an approximate 1 cm rise in sea level, with big tropical storms capable of causing a storm serge of several meters. This is always accompanied by heavy rainfall, since warm air over the ocean leads to evaporation of sea water, which is then carried with the storm. These combined often lead to catastrophic flooding in areas hit by tropical storms, which is what has caused the problems in the Philippines. 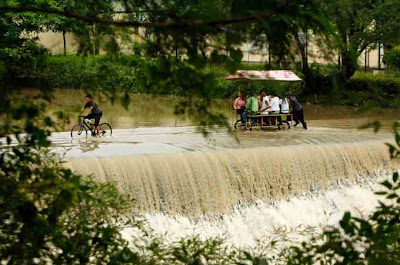 See also Hurricane Sandy causes devastation in Jamaica, Massive Earthquake to the east of the Philippines, Operations ceased at Padcal Mine following flooding, New species of Deepwater Tilefish from the Philippines and A deep-sea hydrothermal vent community discovered in the Mariana Trench.