Comet 2012/S1 (ISON) was discovered by Vitali Nevski and Artyom Novichonok at the International Scientific Optical Network near Kislovodsk, Russia on 21 September, and its discovery rapidly confirmed by follow-up observations from the Remanzacco Observatory in Italy, and detection of the (previously unnoticed) comet in images from other telescopes dating back as far as December 2011. 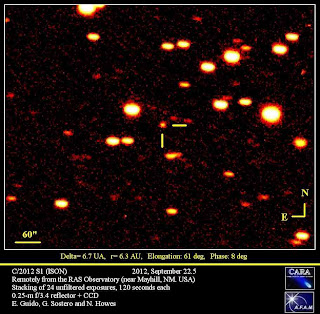 The comet is currently approaching the Inner Solar System on a parabolic orbit that suggests that it might have recently been disturbed from an orbit which kept it entirely within the Oort Cloud. If this is the case, and 2012/S1 (ISON) has not previouly visited the Inner Solar System, then the commet is likely to produce a substantial icy tail (each time a comet visits comes close to the Sun then some of its ice is lost, so that 'fresher' comets that have not made to many visits, will have more ice to shed), and consequently appear brighter to observers.

The position of Comet 2012/S1 (ISON) on 1 October 2012, and it's orbit relative to the plane of the Solar System. NASA/JPL Small-Body Database Browser.

It has been widely reported that 2012/S1 may outshine the full Moon when at its closest to the Sun, though predictions about the brightness of comets should be made with caution, and it may be difficult to see the comet when it is this close to the Sun. It is quite likely it will be easier to observe as it passes the Earth, even if it is not as bright in the sky.