A new species of Hadrosauroid Dinosaur from the Late Cretaceous of Shanxi Province, China.

Hadrosaurs, or Duck-Billed Dinosaurs, were large herbivorous Ornithischian Dinosaurs widespread across Laurasia (Eurasia plus North America; Laurasia split away from the southern continents in the Triassic, the split into North America and Eurasia during the Cretaceous) during the Late Cretaceous. They were descended from the earlier Iguanadontids, but with more sophisticated jaws and teeth, which allowed them to chew their food, not by side-to-side motion as in a modern mammal, but by a unique flexion of the upper jaw parts, which moved apart as the lower jaw moved upwards (from which scientists conclude these Dinosaurs must have had lips, unlike any modern relative of the Dinosaurs). The term 'Hadrosauroid' refers to the widest possible grouping of Hadrosaurs, including all animals in the group after their evolutionary split with the Iguanadontids in the Early Cretaceous, whereas the most derived members of the group are split into two subgroups, the Lambeosaurs, which had hollow boney crests, thought to have been used for making sounds, and the Saurolophides, which either lacked crests or had solid ones.

In a paper published in the journal PLoS One on 18 October 2013, a team of scientists led by Run-Fu Wang of the Shanxi Museum of Geological and Mineral Science and Technology describe a new species of Hadrosauroid Dinosaur from the Late Cretaceous Zhumapu Formation of Shanxi Province in northern China. 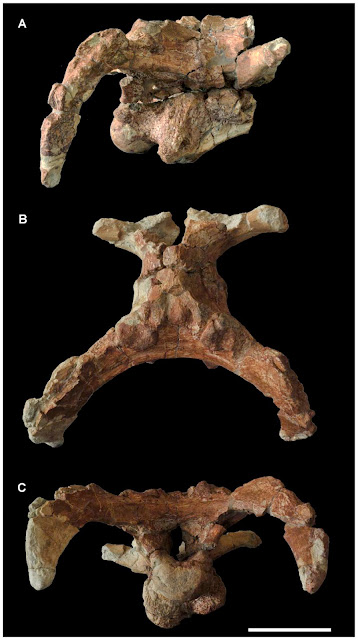