The asteroid 2012 ER14 flew past the Earth at a distance of 13 150 000 km (34.2 times as distant as the Moon), slighty after 2.45 am GMT on Wednesday 23 October 2013. There was no danger of the asteroid hitting us, though were this not the case 2012 ER14 would be considered an extremely dangerous object, as it is estimated to have a diameter of between 160 and 490 m, large enough enough to pass through the Earth's atmosphere reasonably intact and impact directly with the planet's surface, leaving a crater 2-7 km in diameter and causing devastation over a wide area. Such an event would probably have climatic affects lasting for decades. 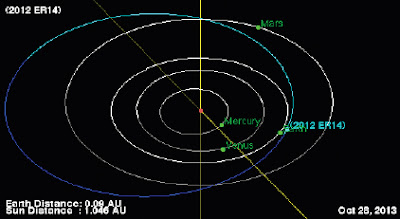 2012 ER14 was discovered on 14 March 2012 bythe University of Arizona's Mt. Lemmon Survey at the Steward Observatory on Mount Lemmon in the Catalina Mountains north of Tucson. The designation 2012 ER14 implies that the asteroid was the 367th object discovered in the first half  of March 2012 (period 2012 E).

While 2012 ER14 occasionally comes near to the Earth, it does not actually cross our orbital path. It has an elliptical 765 day orbit that takes it from 1.04 AU from the Sun (1.04 times the distance at which the Earth orbits the Sun), slightly outside our orbit, to 2.23 AU from the Sun, considerably outside the orbit of Mars, so unless an encounter with another body causes it's orbital path to alter in a very specific way (highly unlikely) there is no chance of it hitting the Earth. As a Near Earth Object that remains strictly outside the orbit of the Earth it is classed as an Amor Family Asteroid.