The United States Geological Survey recorded a Magnitude 5.1 Earthquake at a depth of 56.9 km, 3 km to the south of the town of Guarumal near the Pacific coast of Chiriquí Province in Panama, slightly before 10.30 am local time (3.30 pm GMT) on Sunday 27 October 2013. There are no reports of any damage or casualties arising from this event, but people reported feeling it across Costa Rica and western Panama. 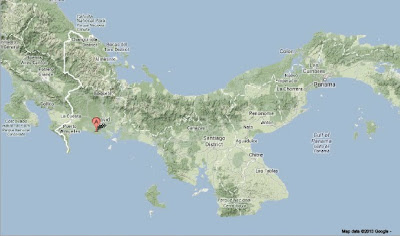 The approximate location of the 27 October 2013 Panama Earthquake. Google Maps.

Panama lies on a tectonic microplate known as the Panama Plate or Panama Block, which has broken away from the North American Plate within the last 20 million years, and is now caught between the Caribbean, Cocos, Nazca and South American Plates. The southern margin of this is both a convergent and a transform margin, as the Nazca Plate moves past the Panama plate in a westerly direction, but is also being partially subducted beneath Panama. This is not a smooth process; the two plates continually stick together, then break apart once the pressure builds up sufficiently, causing Earthquakes in the process.