The Asteroid 2000 YN30 was discovered by the Near Earth Asteroid Tracking (NEAT) group in December 2000 (the name 2000 YN30 implies the 763rd asteroid discovered during the second half of December 2000 - period 2000 Y). It is a 1.7 km diameter object in a Hilda Group orbit, in a 2:3 orbital ration with Jupiter. Hilda Group Asteroids complete three orbits for every two orbits of Jupiter, with their aphelion (the furthest point in their orbit from the Sun) moving in succession through the L₄, L₅ Lagrangian points (60º ahead and behind Jupiter) and the opposite point on its orbit (180º ahead and behind). 2000 YN30 does not appear to be in a stable orbit, and is therefore referred to as a 'Quasi-Hilda Object'.

The motion of the Hilda Group Asteroids. Even though each asteroid is in an elliptical orbit, the resonance of their aphelions with the Lagrangian points of Jupiter makes gives the group an apparent triangular shape. Cosmographica.

Cheng & Ip detected a dust tail emerging from 2000 YN30 in January 2009, which they were able to track through till March of the same year. Such dust tails typically form as a comet approaches its perihelion, when ice at the surface sublimates away (turns directly from a solid to a gas - liquids do not form in a vacuum), releasing particles of silica trapped in the ice. For this reason they conclude that 2000 YN30 should be considered to be a Jupiter Family Comet (a comet with an orbital period of less than 20 years; in this case 2842 days, or 7.78 years), and rename it 212P/NEAT (2000 YN30), a designation which indicates it is the 212nd periodic comet discovered, that it was discovered by NEAT and that it was formerly known as asteroid 2000 YN30. 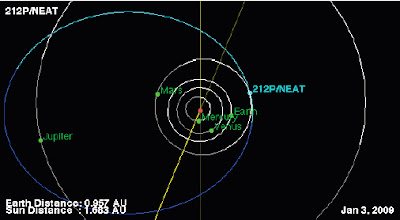