The re-examination of a 'mummified' Eocene Frog.

In 1873-7 the French naturalist Henri Filhol published a series of descriptions of 'mummified' animals from the Quercy region of southwest France, which were actually external moulds of the animals preserved in phosphatic clays within fissures on a limestone plateaux. Unfortunately Filhol did not accurately record the locations from which these fossils originated, preventing accurate dating of individual specimens, though the collection as a whole are thought to range from Early Eocene to Early Miocene in age. One of these fossils comprised the head and part of the torso of a Frog, which Filhol named as Rana plicata. He also assigned a separate forelimb to this species, though whether-or-not this limb came from the same specimen and/or locality is unclear. In 2012 This specimen was renamed Rana cadurcorum by Carolina Martín, Miguel Alonso-Zarazaga and Francisco de Borja  Sanchiz of the Museo Nacional de Ciencias Naturales in Madrid,  on the basis that the name Rana plicata was already in use at the time when Filhol made his original description.

In a paper published in the journal PLoS One on 25 September 2013, a team of scientists led by Fabien Laloy of the Centre national de la recherche scientifique, the Muséum national d’histoire naturelle and the Université Pierre et Marie Curie (all in Paris) redescribe the specimen, including extra data from CT Scans of the fossil, which reveal that much of the skeleton of the Frog is preserved in life position. 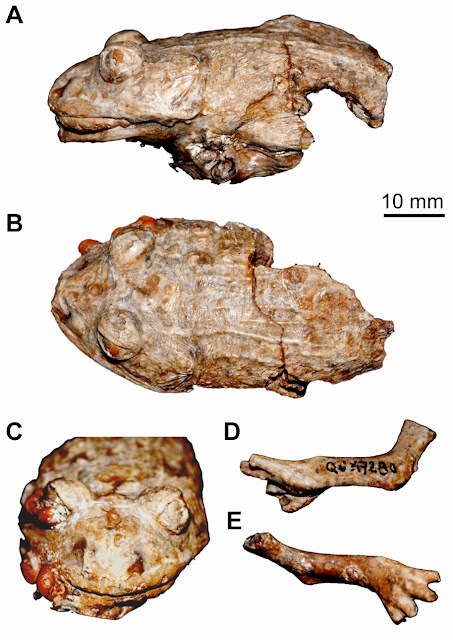 Based upon the additional data provided by the CT Scans, Laloy et al. conclude that the specimen should be assigned to the species Thaumastosaurus gezei, previously described from an isolated skull, also from the Quercy Phosphorites.

The skeleton is visible through the external cast, shown in transparency. (A) Skeleton, uniformly coloured. (B) Skeleton, with the different regions and bones displayed in different colors. (C) Separate left forelimb. Laloy et al. (2013).

This additional material also helps to clear up a taxonomic problem about Thaumastosaurus gezei. To date three species of Thaumastosaurus have been described, all from disarticulated bones from the Quercy Phosphorites and from southern England and dated to the Late Eocene. Based upon the available material, the genus appeared to be most closely related to the Hyloid Frogs of Central and South America, which is problematic as these areas were not close to France in the Eocene. The new material suggests a closer affinity to the Old World Natatanuran Frogs, a group whose presence in Eocene France requires little explanation.