Asteroid 2013 TN127 flew past the Earth at a distance of 4 297 000 km (slightly over 11 times as distant as the Moon) slightly after 11.10 pm GMT on Thursday 10 October 2013. There was no danger of the asteroid hitting us, and even if it had done it would have presented little threat. 2013 TN127 has an estimated diameter of between 11 and 36 m, and an object this size would be expected to break up in the atmosphere between 15 and 31 km above the ground, with only fragmentary material reaching the Earth's surface. 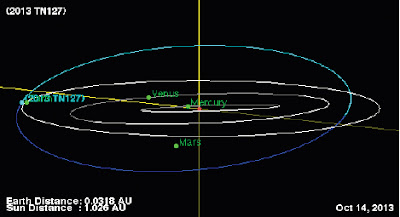 2013 TN127 has a 330 day orbital period, with a nearly circular orbit at an angle to the plain of the Solar System that brings it close to the Earth's orbit once on each circuit. This means that close encounters between the asteroid and Earth are fairly common, with the last thought to have happened in  October 2004 and the next predicted in March 2014. Although 2013 does cross the Earth's orbit and is briefly further from the Sun on each cycle, it spends most of its time closer to the Sun than we are, and is therefore classified as an Aten Group Asteroid.