Animal remains from Middle Neolithic deposits at the Pena d’Água Rock-shelter of Portugal.

Middle Neolithic remains are known from a number of archaeological sites across Portugal, and have been studied since the nineteenth century. However historically almost all studies of this material have concentrated on funerary behavior rather than the lifestyles of the living people. The Pena d’Água Rock-shelter is located on the eastern rim of the Estremadura Limestone Massif to the northeast of Lisbon. The site was excavated in 1992-2000, yielding remains dating from the end of the Pleistocene to the Roman era. A variety of animal bones and teeth were recovered from a layer identified as being of Middle Neolithic origin, with Rabbit, Sheep and/or Goat (the two are hard to tell apart from skeletal remains) and Fox remains being identified at the time, though these have not subsequently been the subject of any published studies. 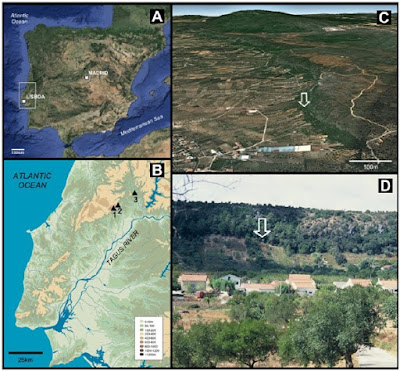 All of the remains assessed to be Middle Neolithic come from a single layer, Db, which also contains pottery fragments, stone tools and charcoal. The pottery fragments showed simpler decoration and were less varied than earlier layers assessed to be Early Neolithic in age, though the stone tools were more sophisticated and include large, complex flint blades. The charcoal was found to be derived from Olive wood, and yielded a radiocarbon age of 5180 years, though with a wide margin of error, leading Corriera et al, to conclude that the layer was laid down between 4522 and 3515 BC. 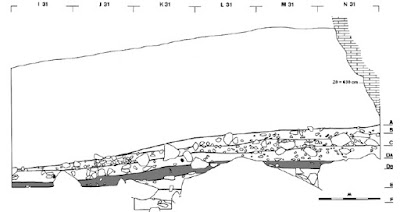 Stratigraphy of the Pena d’Água Rock-shelter (“West Cut”), with indication of layer Db (greyish layer) within the sequence. Z0=630 cm is the local datum used during excavations. Corriera et al. (2015).

The most abundant bones in the layer are those of Rabbits, Oryctolagus cuniculus. Identifying Rabbits in archaeological sites can be problematic. as they are burrowing animals which can place tunnel into site long after they were abandoned by their Human residents. However all of the remains at Pena d’Água are aof adult specimens, and in addition all are disarticulated and fragmentary, and many are charred, suggesting strongly that the remains are the result of Human activity.

The site also yielded several teeth from Fox, Vulpes vulpes, and an uncertain Deer (possibly a Red Deer, Cervus elaphus). Both of these are though to be the result of hunting by Humans, possibly with only partial remains being transported to the site. Red Deer are prized for their meat today, and are likely to have been hunted for food in the Neolithic. Foxes on the other hand are not typically eaten, today, and probably weren't considered particularly palatable in the Neolithic. On the other hand their fur has been prized through much of recorded history, and this may have been the case at Pena d’Água.

Sheep and/or Goat remains are also abundant at the site. These are interpreted as being more probably the remains of domestic animals than wild ones. Domestication is known to have been in practice in the area at the time, with other sites having yielded the remains of Cattle and Pigs. However the methods used to keep these animals is quite different. Cattle and Pigs can be kept in corals and fed with a reasonable level of success, while Sheep and Goats need to be able to forage for themselves, requiring herders to move with the flock, so this discovery adds to the known range of survival skills being employed in Middle Neolithic Portugal. 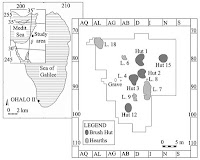 The first dairy farmers in Finland.              Dairy farming (keeping Mammals in order to consume their milk or products derived from it) spread through Europe as part of the ‘Neolithic Package’ of technologies, which originated in the Middle East...
Follow Sciency Thoughts on Facebook.
Posted by Joe Bauwens at 20:33