A farmer in County Antrim, Northern Ireland has lost twenty three sheep after a landslide dumped several tonnes of rock and soil onto his land on Tuesday 5 January 2015. The incident happened on Dermot McDonnell's farm at Kilmore, near Glenariff following a day of heavy rain. Landslides are a common problem after severe weather events, as excess pore water pressure can overcome cohesion in soil and sediments, allowing them to flow like liquids. Approximately 90% of all landslides are caused by heavy rainfall. As well as the immediate loss of livestock the event has left a large amount of debris on the farm, including large boulders which are likely to be difficult to remove and which present a potential threat to McDonell's home and  road below the farm. 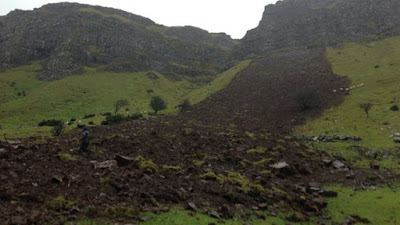 Debris on a farm in County Antrim following the 5 January 2015 landslide. Dermot McDonnell.

Ireland and the United Kingdom have been struck by a series of severe Atlantic storms this winter, bringing widespread flooding and triggering a number of landslip and subsidence events. This is due to exceptionally high temperatures over the Atlantic Ocean this year; ocean storms form due to heating of air over the sea, as the air is heated the the air pressure drops and the air rises, causing new air to rush in from outside the forming storm zone. If this zone is sufficiently large, then it will be influenced by the Coriolis Effect, which loosely speaking means the winds closer to the equator will be faster than those further away, causing the storm to rotate, clockwise in the northern hemisphere and anticlockwise in the southern hemisphere.