Fossil Fleas from the Mesozoic - are they or aren't they?

Putative Mesozoic fossil Fleas were first recorded in Australia and Russia in the 1970s, with a number of recent publications describing Fleas from the Jurassic and Cretaceous of China. These Fleas have been speculated to have been ectoparasites (parasites that live on the exterior surfaces of their hosts) of a range of vertebrate animals, including feathered Dinosaurs, Birds, Pterosaurs and Mammals, however these associations are all based upon the presence of the Flea fossils in the same strata as their possible hosts; no Flea has been found preserved within the fur or feathers of a host animal.

Fleas can be identified morphologically by a number of features, these being lateral (sideways) flattening, the absence of wings combined with a highly modified wing joint, a saddle-shaped pygidium (structure formed of the rearmost segments), highly modified rear legs allowing the distinctive jumping movement associated with Fleas, mouthparts modified to form a piercing stylet and reduced eyes. While the numerous putative 'Flea' fossils are generally Flea-like in appearance, only two of these features, reduced eyes and modifieds mouthparts forming a piercing stylet, have been observed, both of which are known to have arisen separately in a wide range of Insect groups, preventing the confident assignment of these Insects to the order Siphonaptera (Fleas). Furthermore Dittmar et al. note that genetic studies of Fleas using molecular clock methodologies have predicted that the group arose some time during the Cretaceous, making putative Jurassic and even Early Cretaceous fossil Fleas somewhat unlikely. 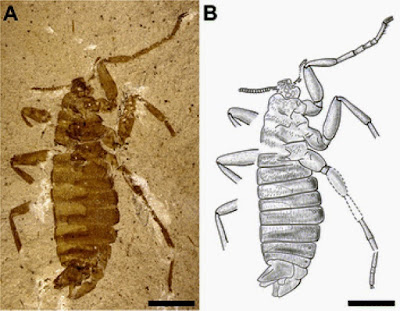 From an ecological perspective these Insects have been identified as animal ectoparasites based upon the presence of piercing stlylets and the presence of claws and bristles which would enable them to cling onto their hosts. However such stylets are present in Insects with a range of different lifestyles, including bloodsucking (Fleas, Mosquitoes), sucking the sap of plants (Aphids) and even predating other invertebrates (Assassin Bugs), and so cannot be taken in themselves as evidence of a bloodsucking lifestyle, while claws and bristles facilitate movement in a variety of complex three dimensional environments, not just feathers and fur, leading Dittmar et al. to conclude there is no evidence for or against an ectoparasitic lifestyle in these specimens.

A new species of Flea from the Early Cretaceous of Liaoning Province, China.      The first Mesozoic fossil Fleas were discovered in Cretaceous deposits in Australia and Russia in the 1970s. However no further Mesozoic Fleas...

A new species of Flea from the Philippines. Fleas of the Family Stivaliidae are found across Africa, Australasia and Southeast Asia. They are specialist parasites of Rodents and Shrews (and... 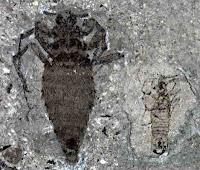 Giant Fleas from the Jurassic of China.      Fleas are highly specialized parasitic insects, preying on mammals and birds. They are related to Flies and Scorpionflies, though this relationship is not obvious as Fleas have become physically specialized, loosing their wings, altering their body shape and evolving specialized legs and mouthparts. A number of putative fossil fleas have been described from the Jurassic...
Follow Sciency Thoughts on Facebook.
Posted by Joe Bauwens at 12:59