Between December 2013 and December 2015 an outbreak of the Viral disease Ebola, which causes an acute hemorrhagic fever, killed a total of 11 315 people in West Africa, with the vast majority of fatalities in Liberia (4809 deaths), Sierra Leone (3955 deaths) and Guinea (2536 deaths). The outbreak was declared over on 14 January 2016, when Liberia was declared officially free of the Virus by the World Health Organization, the last country to be so cleared. However on 15 January Sierra Leone, a country thought to have been clear of the virus since 7 November 2015, reported the death of a young woman earlier this week was confirmed to have been caused by the disease. 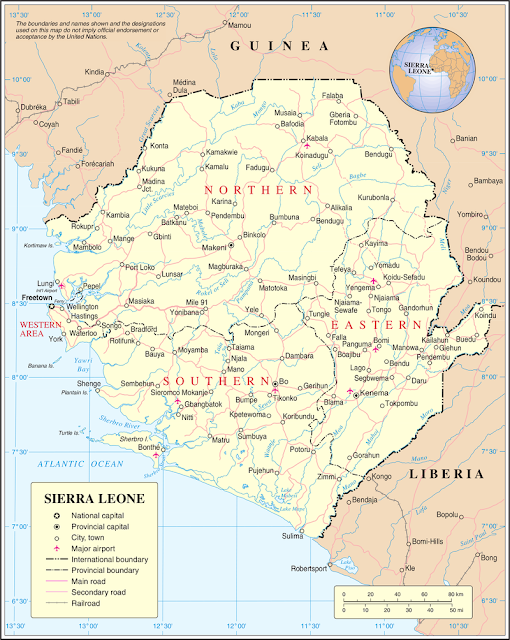 The woman has not been identified, but is understood to have been a 22-year-old student from Lunsar in Port Loko District, who may have contracted the disease in Kambia District, where she stayed from Christmas until 6 January. The woman fell ill while visiting a family home in Tonkalili, and admitted to hospital after visiting a hospital outpatients department suffering from dizziness, and died on 12 January.

Ebola was not identified while the woman was alive, as she showed no typical signs of the illness. However the disease was diagnosed from swabs which were taken after death as part of an ongoing screening program and sent for testing at Public Health England in the UK. This means that since the since the illness was not identifies until after the victim was buried, none of the precautions usually taken against the spread of the highly contagious disease were taken.

A hundred and nine people have been identified as having ha potentially hazardous contact with the woman, with 28 considered to be at high risk, Three of these people have yet to be traced.Officials from the World Health Organization have also suggested that the burial of the victim may not have been carried out in a safe fashion.

This resurgent outbreak has been linked to the discovery that the disease can linger in other bodily fluids long after it has been cleared from the blood of recovered victims, providing a potential reservoir of infection that cannot be detected by conventional blood tests.