Pangolins, Pholidota, are highly specialized Mammals distantly related to the Carnivora (Dogs, Cats, Bears etc.). They are specialized Ant-eaters, lacking teeth and having long, sticky tongues used to extract the Insects from their nests. Uniquely among Mammals Pangolins are covered by keratin scales similar to those of Snakes and Lizards, although these are thought to be secondarily derived from Mammalian fur (i.e. modern scaley Pangolins had hairy ancestors). There are eight living species of Pangolins, four found in Asia and four in Africa, all of which are listed on the International Union for the Conservation of Nature's Red List of Threatened Species. The Sunda and Chinese Pangolins (Manis javonica and Manis pentadactyla) are listed as Critically Endangered, while the Philippine Pangolin and Indian Pangolin (Manis culionenesis and Manis crassicaudata) are listed as endangered; the four African species, the Black-bellied Pangolin (Phataginus tetradactyla), White-bellied Pangolin (Phatagimus tricuspis), Giant Ground Pangolin (Smutsia gigantea) and Temminck's Ground Pangolin (Smutsia temminckii) are all classified as Vulnerable. Pangolins face a variety of threats, including habitat loss and hunting for consumption by local human populations, however the major source of decline in all Pangolin populations, particularly those in Asia, is the international trade in both live Pangolins and Pangolin parts, to China and to a lesser extent Vietnam, where the meat of Pangolins is prized as a luxury food item and a variety of body parts including the scales and blood are used in traditional medicine.

In a paper published in the journal Global Ecology and Conservation in January 2016, Vincent Nijman of the Oxford Wildlife Trade Research Group at Oxford Brookes University, Ming Xia Zhang of the Xishuangbanna Tropical Botanical Gardens of the Chinese Academy of Sciences and Chris Shepherd of TRAFFIC discuss the trade in Pangolins and Pangolin parts at the Special Development Zone of Mong La in Shan State, Myanmar.

Pangolins are protected by law in both Myanmar and China, with potentially severe punishments for those found in possession of whole or partial Pangolins. However law enforcement is sometimes patchy in both nations, and Myanmar is thought both to be a source of Pangolins traded in China and a conduit for Pangolins from elsewhere in Asia and possibly Africa entering China. Three species of Pangolin are found in Myanmar, with the Sunda Pangolin, Manis javanica and Chinese Pangolin, Manis pentadactyla, found in the east of the country, including the Mong La area, and the Indian Pangolin, Manis crassicaudata, found in the west of the country, more tan 1000 km from Mong La.

The Mong La Special Development Zone is one of 24 such economic zones in Myanmar set up in 2001 with the aim of combating poverty and raising living standards in rural areas. The zone lies on the border with China, and while theoretically under the jurisdiction of Myanmar, the enclave used the Chinese Yuan Renminbi currency and operates on Beijing Standard Time, an hour and a half ahead of the rest of Myanmar, and electricity and phone services are provided by Chinese companies. The enclave is under control of the National Democratic Alliance Army of the Eastern Shan State, a former communist guerrilla group which signed a ceasefire with the government in 1999. The town has been developed with Chinese investment, and has an economy largely built on the entertainment industry, with casinos, nightclubs, karaoke bars, exotic meat restaurants and a thriving sex industry.

Both bags of Pangolin Scales and whole skins were observed being traded in the central market on all visits, with bags of scales estimated to contain material from as many as three individual Pangolins. In 2006 four bags of scales and one skin were observed in the market, in 2009 five bags of scales and one skin, in 2013-14 fifteen bags of scales and ten skins, and in 2015 eighteen bags of scales and thirteen skins. Three live Pangolins were also observed being traded in 2006, and one in 2013-14. A Pangolin head was observed for sale in 2006. It was not possible to inspect any of the items sufficiently to identify them to species level, but all other animals seen traded in the market were native to Myanmar, with the exception of two Alligator Snapping Turtles, Macrochelys temminckii, a North American species widely bred in captivity in Asia, leading Nijman et al to believe these specimens were also likely to be native species. 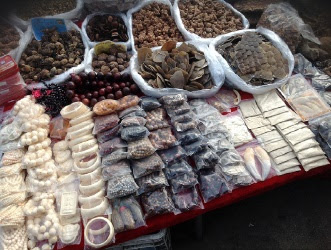 The area also boasts a number of specialist wildlife shops, selling skins, stuffed and mounted specimens and similar items. No Pangolin related items were seen in these shops in 2006 and 2009, but in 2013-14 five Pangolin skins were observed along with three Pangolins in wine (Pangolin wine is considered to have medicinal properties), while in 2015 three skins and ten Pangolins in wine were observed. As these shops are known to sell a variety of goods from considerably beyond the borders of Myanmar, including African Elephant and Hippopotamus ivory, Indian Tiger skins, horns from White Rhinos, Tibetan Antelope and Bharal (a wild Sheep native to the Himalayas), and parts of Helmeted Hornbills, from Southeast Asia, Nijman et al suggest it is quite likely that some of these Pangolin remains come from beyond Myanmar. 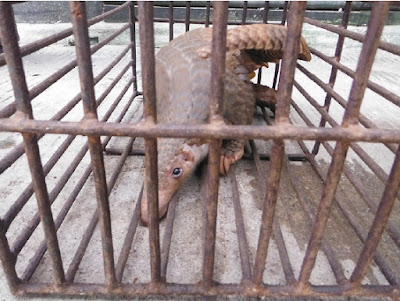