At least 22 people are known to have died following an Earthquake in Manipur State, India, measured by the United States Geological Survey as having a Magnitude of 6.7 and occurring at a depth of 55 km about 30 km to the west of the city of Imphal atabout 4.35 am local time on Monday 4 January 2015 (about 11.05 pm on Sunday 3 January GMT). The event was felt as far away as Delhi, and caused damage and casualties as far away as Bihar State. 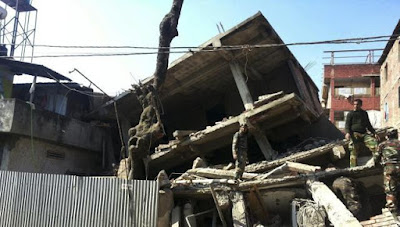 The approximate location of the 4 January 2016 Manipur Earthquake. Google Maps.

Northeast India is on the northern part of the Indian Plate, close to its boundary with Eurasia. India is moving northward, pushing into Eurasia at a rate of 40 mm a year. This causes quakes on both plates, as well as the folding and uplift that has created the Himalayas and the Tibetan Plateau.

The movement of India into Eurasia over the last 71 million years. USGS.


Witness accounts of Earthquakes can help geologists to understand these events, and the structures that cause them. The international non-profit organization Earthquake Report is interested in hearing from people who may have felt this event; if you felt this quake then you can report it to Earthquake Report here.
See also...

Mysterious eruption in Manipur.                Press sources in India are reporting a mysterious 'volcanic' eruption that took place on Sunday 13 October 2013, close to the village of Tusom in the Ukhrul District of Manipur State in northeast India. The...
Follow Sciency Thoughts on Facebook.