Magnitude 6.7 Earthquake off the south coast of Hokkaido Island, Japan.

The Japan Meteorological Agency (which also monitors seismic activity) recorded a Magnitude 6.7 Earthquake at a depth of 50 km off the south coast of Hokkaido Island, slightly before 12.30 pm Japan Standard Time (slightly after 3.30 am GMT) on Thursday 14 January 2016. There are no reports of any damage or injuries associated with this event, though it was felt as far south as Tokyo.

The approximate location of the 14 January 2016 Hokkaido Earthquake. Google Maps.

Japan has a complex tectonic situation, with parts of the country on four different tectonic plates. Eastern Honshu area lies on the boundary between the Pacific, Eurasian and Philipine Plates, where the Pacific Plate is passing beneath the Eurasian and Philippine Plates as it is subducted into the Earth. This is not a smooth process; the rocks of the two plates constantly stick together, only to break apart again as the pressure builds up, causing Earthquakes in the process. 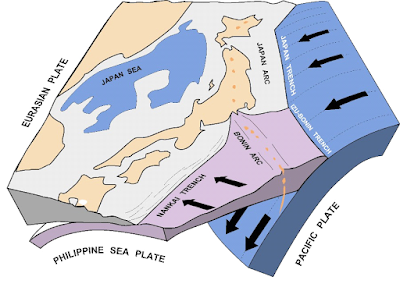 Alert level around Mount Hakone raised amid fears of a phraetic erruption.                  Authorities in Kanagawa Prefecture have closed off an area of Mount Hakone, a popular tourist destination, following a rise sharp in seismic activities since 26... 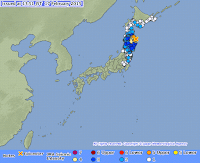