Planets are thought to form in protoplanetary disks, which is to say disks of gas and dust around young stars. However not all the material in a protoplanetary disk is likely to be used up in the formation of planets, leaving one or more debris disks, such as the Main Asteroid Belt and Kuiper Belt in our own Solar System. These debris disks typically contain rocky and icy bodies, but not free gas. However this is not an instantaneous event, and a period exists where a planetary system is forming accompanied by one or more disks of dust and gas; these evolving disks in forming planetary systems are called 'transition disks.

In a paper published on the arXiv database at Cornell University Library on 5 January 2015 and accepted for publication in the Publications of the Astronomical Society of Japan, a team of scientists led by Daehyun Oh of the Department of Astronomical Science of the Graduate University for Advanced Studies and the National Astronomical Observatory of Japan discuss the results of a study of the LkCa 15 stellar system and its transition disks made with the Subaru Telescope.

LkCa 15 is a young (2-5 million-year-old) K5-type orange dwarf star, roughly 547 light years from Earth in the constellation of Taurus. It has approximately the same mass as the Sun but only about 74% of its luminosity, new material is still accreting onto the star at a rate of about one Earth mass every 23 years.  The system has a well documented transition disk as well as two candidate planets, with a second inner disk having been discovered in 2015.

Oh et al. were able to clearly resolve two elliptical disks around LkCa 15, these are apparently in the same plane, tilted at a angle of 44˚ from our perspective. However the gap separating these disks, which forms an apparent third component to the system, appears to be tilted at a greater angle, 52˚. Since this gap is only an apparent member of the disk system, not a genuine object, this apparent difference in angle can only be a product of the structure of the two actual rings. 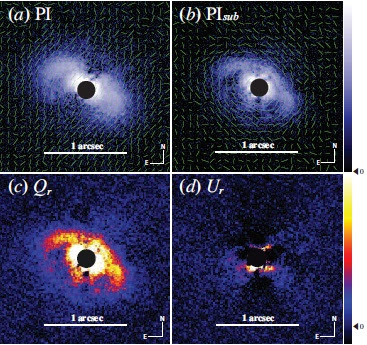 PI and overlapped polarization vector map images (2.0′′ × 2.0′′) before (a) and after (b) halo subtraction. The saturated region is occulted by a software mask (r∼0.1′′ ), the vectors are binned with spatial resolution, and the lengths are arbitrary for presentation purposes. (a): The effect of a polarized halo appears to have a tendency toward the minor axis of the disk. (b): The polarization tendency to the minor axis was removed, and the disk-origin polarization along the disk surface was revealed. Bottom: The radial Stokes Qr (c) and Ur (d) images. In the Qr image, both the outer and inner disks are significantly detected as expected from the PI image. On the other hand, the Ur image shows no disk-like component. Oh et al. (2015).

In order to resolve this Oh et al. examined the brightness asymmetries of the disks in order to glean further information about their inclination. This works because the side of the disk behind the star is reflecting light directly back towards us, whereas light reaching us from the near side has to be scattered through the disk. Using this method they found that the inner portions of the disks were misaligned by about 13˚, the best explanation for this being that the inner disk is significantly warped. 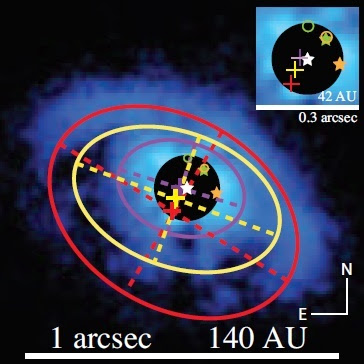 Elliptical fitting results of the inner disk (purple), the gap (yellow), and the outer disk (red). The image has been smoothed by a gaussian with r=2 pixels to reduce the effects of speckles on the inferred structure of the disk. The central region is also shown in the right top panel. White star indicates the location of LkCa 15. Green and orange stars indicate where the planet candidates LkCa 15 b and c were detected in 2014, respectively (Sallum et al. 2015). Empty green and orange circles indicate the locations of two infrared sources seen in 2009-2010 (Kraus & Ireland 2012), which are assumed as LkCa 15 b and c, respectively. Oh et al. (2015).

This study greatly adds to the evidence for the presence of one or more planets or protoplanets in the LkCa 15 system. The warping of the inner disk observed would require the presence of a planet with a planet having a mass at least equivalent to that of Jupiter, while the gap between the two disks is about 27 AU (27 times the distance at which the Earth orbits the Sun), which would require multiple such large planets to clear. 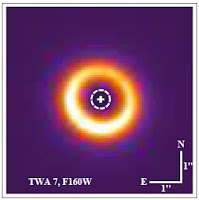 Detecting debris disks around small nearby stars in old Hubble images.                        Debris disks are rings of dust, rock and icy material left surrounding stars after planet formation has occurred (unlike protoplanetary disks, which are present around very young stars only, and which are thought to be largely consumed by planetary formation). Our Solar System has two such debris disks, the Asteroid Belt and the Kuiper Belt, and in recent years... 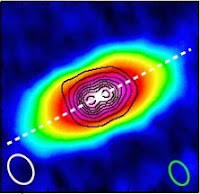 The outer disk of T Chamaeleontis.                 T Chamaeleontis is a T Tauri star (a very young star which has not yet began to generate heat by hydrogen fusion, but which produces considerable energy through gravitational heating) estimated to be about 7 million years old, roughly 350 light years from Earth in the constellation of Chamaeleontis. It is known to be surrounded by two transition disks (disks of dust and gas surrounding very young stars, thought to... 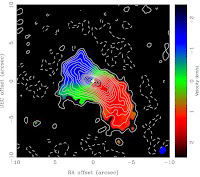