Widespread flooding and at least one fatality have been reported in New South Wales, Victoria and South Australia following heavy rainfall across the region on Sunday 3 and Monday 4 January 2016. Authorities are advising against driving into floodwaters and advising people to evacuate in some low lying areas. Warnings about landslides and bush fires have also been issued in some areas. 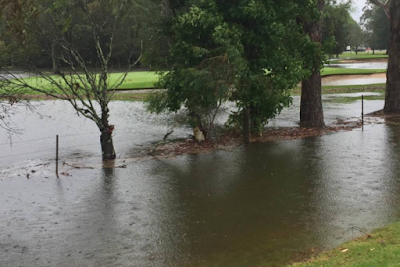 The sole reported casualty of the flooding so far occurred near Seymour in Victoria where a 63-year-old man identified as Max Loweke was swept of a road in a bakery van he was driving by a swollen creek. Elsewhere in Victoria people are beginning to return to the towns of Wye River and Separation Creek, which were devastated by bush fires over the Christmas period. Such bush fires seem an unlikely accompaniment to flooding, but they are fairly common in areas where a largely dry climate is accompanied by periodic storms, enabling dry  vegetation and timber to build up, and potentially be ignited by lighting storms. 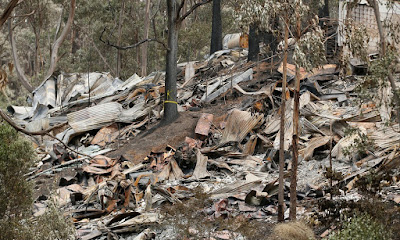 In New South Wales people and livestock have been evacuated from parts of the Moruya River Basin where over 200 mm of rain fell within 24 hours from Sunday evening. Landslides have been reported in several areas in the Snowy Mountains; landslides are a common problem after severe weather events, as excess pore water pressure can overcome cohesion in soil and sediments, allowing them to flow like liquids. Approximately 90% of all landslides are caused by heavy rainfall. 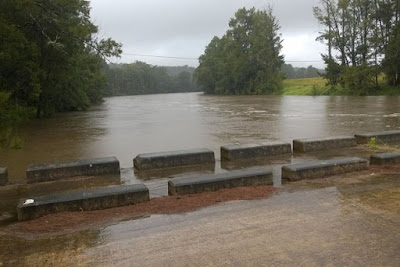 Flooding on the Moruya River rising at the Kiora Bridge in New South Wales. Susan Jameson/ABC.

In parts of norther South Australia over 150 mm of rain fell in the first three days of 2016, with some areas receiving over 40 mm of rain in an hour on Sunday 3 January, breaking a drought that had lasted since May 2015. Many rural communities have been cut off by flooded roads, however there are no reports of any casualties and many people are grateful for the opportunity to replenish water reserves in an arid and often erratic climate.

Storm systems form due to heating of air over the sea. As the air is heated the the air pressure drops and the air rises, causing new air to rush in from outside the forming storm zone. If this zone is sufficiently large, then it will be influenced by the Coriolis Effect, which loosely speaking means the winds closer to the equator will be faster than those further away, causing the storm to rotate, clockwise in the northern hemisphere and anticlockwise in the southern hemisphere. Such storms can carry large amounts of water, evaporated from the surface of the sea by the warmth of the Sun, which can then be released abruptly as rain or hail when the moist air encounters cooler conditions over land (the amount of water the air can hold relates directly to its temperature).
The South Pacific is currently in an El Niño climate phase, which typically brings dryer conditions in Australia. However it also brings very high temperatures to the region, which can lead to the creation of more storm systems, with associated flash flooding events. Flash floods are a common problem in South Australia (and other areas with a dry climate) as protracted periods of dry weather can cause topsoil to dry out completely, making it vulnerable to being blown away by the wind. When rain does arrive it then falls on exposed bedrock, which is much less absorbent, triggering flash flooding as the water escapes over the surface of the ground rather than sinking into it. These floods wash away more topsoil, making the problem progressively worse over time. 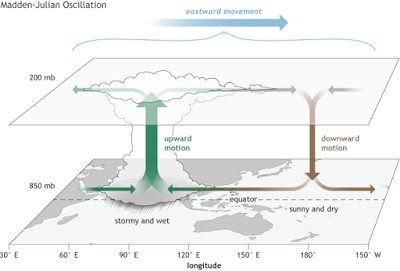 Movements of air masses and changes in precipitation in an El Niño weather system. Fiona Martin/NOAA.
The El Niño is the warm phase of a long-term climatic oscillation affecting the southern Pacific, which can influence the climate around the world. The onset of El Niño conditions is marked by a sharp rise in temperature and pressure over the southern Indian Ocean, which then moves eastward over the southern Pacific. This pulls rainfall with it, leading to higher rainfall over the Pacific and lower rainfall over South Asia. This reduced rainfall during the already hot and dry summer leads to soaring temperatures in southern Asia, followed by a rise in rainfall that often causes flooding in the Americas and sometimes Africa. Worryingly climatic predictions for the next century suggest that global warming could lead to more frequent and severe El Niño conditions, extreme weather conditions a common occurrence.
See also...