Could There be Life on Gliese 581d? 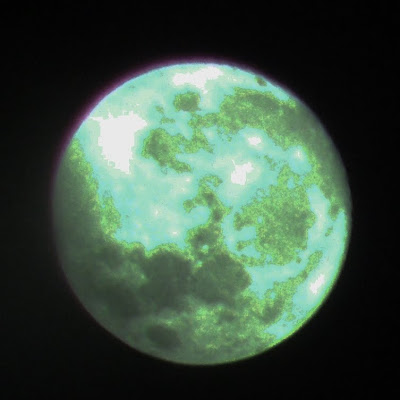 Gliese 581 is a red dwarf star 20.3 light years from the Earth. It has a mass 30% that of our sun, and is only 0.013 times as luminous. A number of planets have been discovered orbiting the star in the last six years; the system is currently thought to have at least four planets, and possibly six.

The first planet discovered in the system was Gliese 581b in 2005. Traditionally stars in multiple systems have been designated with capital letters, so in a binary star system the stars would be A and B. This has been modified for planets, with a lower case letter being used. Generally this starts with a 'b', with the star being 'A', but this is not set in stone and planets are sometimes designated 'a'. Exoplantology is a new field, and the rules are still a bit flexible.

Gliese 581b was discovered by a Franco-Swiss team of scientists using the High Accuracy Radial Velocity Planet Searcher (HARPS) system. This is a spectrographic tool designed to detect a wobble in stars movement by detecting very slight Doppler shifts in the spectrum they emit. This wobble was then used to infer the existence of planets. Most planets discovered by this system, including Gliese 581b, have since been verified by other methods.

Gliese 581b is at least 16 times the size of the Earth, roughly the same size as Neptune, and orbits very close to the parent star, at a distance of 0.04 AU, that is to say 0.04 times the distance between the Earth and the Sun. This is 10% of the distance at which Mercury orbits the sun.

Both are smaller than Gliese 581b having masses roughly 5.6 times that of the Earth. As such they classed as 'Super-Earths', planets substantially larger than the Earth, but two small to be classified as gas giants. At the time of their discovery Gliese 581 was considered the most Earth-like planet then known, even though it is an uncomfortable 0.07 AU from its parent star (Gliese 581d was initially thought to have a mass of 7.7 times that of the Earth making it less Earthlike). Gliese 581 is much smaller and dimmer than our sun, so 0.07 AU is not as lethal as it would be in our solar system, but it is still likely to produce a hellish, Venus-like world.

Gliese 581d is further away from the parent star at slightly over 0.2 AU (half the distance between Mercury and the sun). There are different estimations on the exact distance and the degree of eccentricity in Gliese 581d's orbit. This seems very close, but since Gliese 581 is a much smaller star than our sun, this means Gliese 581d will only receive 30% of the sunlight Earth does (Mars receives 40%), making it a lot colder and darker than we would consider habitable.

In 2009 a team from the Observatory of Geneva used the HARPS system to discover a fourth planet, Gliese 581e. This is a much smaller planet, with a minimum mass of 1.7 times that of the Earth, the smallest planet yet discovered orbiting a main sequence star. However Gliese 581c orbits its parent star at a distance of 0.03 AU - inside the orbit of Gliese 581b, making it a very un-Earthlike place. 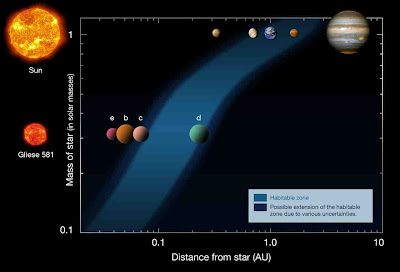 
In 2010 a team from Lick-Carnegie Exoplanet Survey reanalyzed the data from the HARPS system, combined with data from the High Resolution Echelle Spectrometer (HIRES) at the Keck Observatory in Hawaii. They came to the conclusion that the Gliese 581 system contained a further two planets, Gliese 581f & g.

Gliese 581f would be the furthest planet out in the system, at a distance of 0.758 AU, slightly further from the parent star than Venus in our system, but proportionally further out in the smaller Gliese 581 system. With a mass of at least 7 times that of the Earth, Gliese 581f could potentially be a super-Earth type planet or a small gas giant.

Gliese 581g was far more interesting, predicted to have a mass of between 3.1 and 4.3 times that of the Earth, which would give a slightly greater gravity and denser atmosphere than Earth, but still comfortable. More interestingly Gliese 581g orbits at a distance of 0.146 AU, right in the middle of the system's 'Goldilocks Zone'; the area deemed suitable for life, far enough from the star to not be to hot and close enough not to be to cold. If Gliese 581g had an atmosphere similar in composition to that of the Earth it would be slightly cooler, but certainly habitable.

However re-analysis of the HARPS/HIRES data by other teams, including the Observatory of Geneva, has cast doubt upon this interpretation. At the time of writing neither Gliese 581f nor Gliese 581g can be confirmed as definite planets.

On the fifth of May this year (2011) a team lead by Robin Wordsworth of the Laboratoire de M et eorologie Dynamique at the Institut Pierre Simon Laplace in Paris published a paper in The Astrophysical Journal Letters, which re-looked at Gliese 581d.

Gliese 581d had been thought to be at the outer edge of the system's Goldilocks Zone, and likely to be to cold to have liquid water. However Wordswoth et al. observed that a large rocky planet would probably have a dense atmosphere, and that if this atmosphere was dominated by CO₂, then considerable global warming would occur, making the presence of water far more likely.

We know of no reason why Gliese 581d should have a radically different atmosphere to the planets of our solar system, so the prediction of a thick CO₂ atmosphere does not seem unreasonable.

If Gliese 581d does host liquid water then will still be a mighty strange place. Though it is much closer to it's parent star than the Earth, it will only receive about 30% of the light that Earth does, due to the smaller dimmer star which it orbits. However the close proximity to its star makes it likely that Gliese 581d (and the other planets in the Gliese 581 system) is tidally locked, one side turned permanently towards the star. The close proximity of the star means the planet orbits it quickly as well, completing one orbit every 67 days.

Most notable to any human visitor would be the high CO₂ of the atmosphere. CO₂ is not poisonous to humans, but it triggers a gagging response; we know we are asphyxiating because of excess CO₂ in our lungs and are (strongly) motivated to do something about it. If you we were in a pure Nitrogen atmosphere we would not produce any CO₂, and would not recognize we were suffocating. Place us in an atmosphere 50% O₂ and 50% CO₂ then we would believe we were suffocating in an excess of oxygen. Potentially Gliese 581d could potentially have an atmosphere we could breath, but that our bodies would tell us was poisonous.

The Earth is about four and a half billion years old, and scientists currently think that life has existed here for at least 3.8 billion years, though for much of the planet's history this has been restricted to single celled micro-organisms living in the sea; large multicellular organisms that we think of as life have existed for less than half a billion years. The exact age of the Gliese 581 is unknown, but it is thought to be around 7-10 billion years old (red dwarf stars have longer lives than other main-sequence stars, as they burn their fuel more slowly). This gives plenty of time for life to develop on Gliese 581d, though how sophisticated this might be we can only guess at.

Gliese 581d only receives 30% of the light Earth does, but this does not preclude photosynthesis; marine algae on Earth photosynthesize at depths where less light is available.

One of the most profound effects of life on Earth has been the change that it has made to the atmosphere. The early Earth is believed to have had an atmosphere far richer in CO₂, but much of this has been removed by photosynthesis, releasing free oxygen in the process. Modern multicellular animal life, particularly that found on land and in the deep oceans, could not occur until this free oxygen had accumulated. It is thought that oxygen was being produced by photosynthetic organisms long before it started to build up in the atmosphere; before this could occur the free oxygen would have reacted various other elements on the Earths surface; ancient deposits known as banded ironstones are thought to have formed as the free oxygen reacted with iron in the early oceans.

On Gliese 581d this could be problematic, as removing the CO₂ could cause the temperature to fall leading to a global freeze. Something similar happened on the Earth; about 800 million years ago saw the onset of period of global glaciation, referred to as the 'Neoproterozoic Snowball Earth'; in which the oceans appear to have frozen to the equator, with open water remaining only in a few areas of volcanic activity. This lasted till about 650 million years ago, when the glaciers retreated. Shortly after this the first multicellular animals appear in the fossil record, leading to speculation that the period of global freezing was connected to the development of animal life; multicellular animals may have been better able to cope with the frozen conditions, and may have (eventually) produced enough CO₂ to raise the temperature again.

On Gliese 581d this could be far more serious, since potentially the temperature could drop far enough to freeze CO₂ from the atmosphere, a situation which it is difficult to see life recovering from. Nor could we assume that life would necessarily that it would necessarily respond to conditions in the same way as on Earth. However the potential is there for life to have existed on Gliese 581d for a very long time, potentially longer than on Earth, and it is likely to have reached some level of sophistication, though not necessarily in a way we expect or recognize.